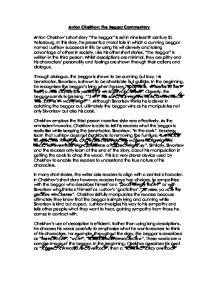 Anton Chekhov: The Beggar Commentary Anton Chekhov's short story "The Beggar" is set in nineteenth century St. Petersburg. In this story, he presents a moral tale in which a cunning beggar named Lushkov succeeds in life by using his wit cleverly and taking advantage of others in society. Like his other short stories, "The Beggar" is written in the third person. Whilst descriptions are minimal, they are pithy and his characters' personality and feelings are shown through their actions and dialogue. Through dialogue, the beggar is shown to be cunning but lazy. His benefactor, Skvortsov, is shown to be charitable but gullible. In the beginning, he recognises the beggar's lying when he says "Look here, it seems to me I met you the day before yesterday in Sadovaya Street". ...read more.

Readers learn that Lushkov does not contribute to removing the furniture. "He hardly touched the furniture, and walked behind the wagons hanging his head, not even making a pretence of appearing busy". Similarly, Skvortsov and the readers only learn at the end of the story, about his manipulation in getting the cook to chop the wood. This is a very clever device used by Chekhov to enable the readers to understand the true nature of his characters. In many short stories, the writer asks readers to align with a central character. In Chekhov's short story however, readers have two choices, to sympathise with the beggar who describes himself as a "poor, hungry man!" ...read more.

Rather than using long descriptions, he chooses his words carefully to emphasise what he wants readers to think of his characters. For example, throughout the story, the beggar is described as "mendicant", "waif", "tatterdemalion scarecrow". These words are a concise image of the beggar. In the beginning, Chekhov describes his coat as "ragged, fawn coloured overcoat", then a "tattered, fancy overcoat" and finally, as the beggar moves up the social hierarchy, "a coat collar of curly fur". Chekhov successfully employs dialogue in his stories to enable the characters to speak for themselves rather than the reader making a judgement. He uses first person narrative to allow readers to reveal the true personality of the character. Chekhov skilfully writes his short stories giving readers entertainment, a story, as well as a moral with a concise choice of words and by using dialogue. ?? ?? ?? ?? ...read more.