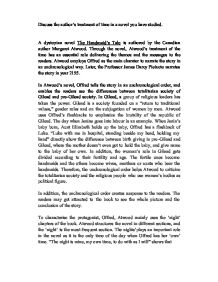 Discuss the author's treatment of time in a novel you have studied. A dystopian novel The Handmaid's Tale is authored by the Canadian author Margaret Atwood. Through the novel, Atwood's treatment of the time has an essential role delivering the themes and the messages to the readers. Atwood employs Offred as the main charater to narrate the story in an unchronological way. Later, the Professor James Darcy Pieixoto narrates the story in year 2195. In Atwood's novel, Offred tells the story in an unchronological order, and enables the readers see the differences between totalitarian society of Gilead and pre-Gilead society. In Gilead, a group of religious leaders has taken the power. Gilead is a society founded on a "return to traditional values," gender roles and on the subjugation of women by men. Atwood uses Offred's flashbacks to emphasize the brutality of the republic of Gilead. ...read more.

To characterise the protagonist, Offred, Atwood mainly uses the 'night' chapters of the book. Atwood structures the novel in different sections, and the 'night' is the most frequent section. The nights'plays an important role in the novel as it is the only time of the day when Offred has her 'own' time. "The night is mine, my own time, to do with as I will" shows that Offred feels free in the nights and, thinks that it is her 'own.' This emphasizes that there are limited amount of things that are her own in the state of Gilead. Furthermore, in the night, Offred frequently has the flashbacks of her pre-Gilead life, and also thinks about her life in Gilead, and Atwood shows that Offred is a character who analyzes what she gets taught by the Aunts, and tries to oppose them mentally, "Aunt Lydia did not actually say this, but it was implicit in everything she did say" is an example showing Offred thinking about what she got taught. ...read more.

"Give me children, or else I die" is from Genesis, 30:1-3, and commander reads it before the ceremony. To finish her novel, Atwood uses 'Historical notes" to changes the time to year 2195. This helps to answer the questions created by the unchronolgical structure of the story. Also, the narrator changes to Professor Piexoto, and this shows the observers' point of views about the Gilead. The Professor's last sentence is "Are there any questions?" It gives the story a deliberately open-ended conclusion. Therefore, the readers are asked to judge Gilead's evil, tyrannical, and soul-destroying society. The Handmaids Tale travels over the time by using the parts such as nights and the historical notes. Also, the protagonist herself tells us the story in the unchronological way. The readers may get confused. However, Atwood treats the time in her own way to highlight the brutality of Gilead, and the "historical notes" at the end of the novel helps to understand about the whole story. ?? ?? ?? ?? ...read more.