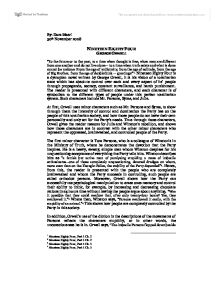 Character Analysis of 1984 by George Orwell

By: Dara Masri 30th November 2008 NINETEEN EIGHTY FOUR GEORGE ORWELL "To the future or to the past, to a time when thought is free, when men are different from one another and do not live alone- to a time when truth exists and what is done cannot be undone: From the age of uniformity, from the age of solitude, from the age of Big Brother, from the age of doublethink - greetings!" 1 Nineteen Eighty Four is a dystopian novel written by George Orwell, it is his vision of a totalitarian state which has absolute control over each and every aspect of its' people through propaganda, secrecy, constant surveillance, and harsh punishment. The reader is presented with different characters, and each character is of symbolism to the different types of people under this perfect totalitarian system. Such characters include Mr. Parsons, Syme, and Julia. At first, Orwell uses minor characters such as Mr. Parsons and Syme, to show through them the intensity of control and domination the Party has on the people of this totalitarian society, and how those people do not have their own personality and only act for the Party's needs. Thus through those characters, Orwell gives the reader reasons for Julia and Winston's rebellion, and shows how those characters are in contrast with the other minor characters who represent the oppressed, brainwashed, and controlled people of the Party. ...read more.

saying, "Of course I'm guilty!"7 Where he does not even question himself if it is true whether he talked in his sleep or not and said "Down with Big Brother". Moreover, he even thanks his children for turning him in before it is too late, he says, "I'm glad they got me before it went any further."8 Which this, again, shows the level of control that the Party has gained over the people in this society. Syme is another minor character that represents the oppressed people under this system, however; unlike Parsons, Syme is intelligent. A small man, he is a fanatical member of the Party, who is obsessed with words and works on the production of the Newspeak Dictionary. He is described as "venomously orthodox"9 and is portrayed, like all other minor characters in the story, such as the doctors in the lab in the Ministry of Love, as inhumane, as when he was describing the hanging he says, "I like to see them kicking. And above all, at the end, the tongue sticking right out, and blue-a quite bright blue. That's the detail that appeals to me."10 This shows how the human emotions are taken out of the people, and how they can be heartless and cold-blooded. ...read more.