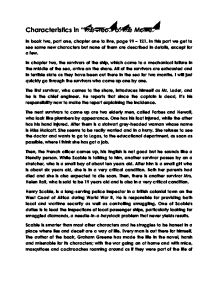 Characteristics in the Heart of the Matter

Characteristics in "The Heart of the Matter" In book two, part one, chapter one to five, page 99 - 121. In this part we get to see some new characters but none of them are described in details, except for a few. In chapter two, the survivors of the ship, which came to a mechanical failure in the middle of the sea, arrive on the shore. All of the survivors are exhausted and in terrible state as they have been out there in the sea for two months. I will just quickly go through the survivors who come up one by one. The first survivor, who comes to the shore, introduces himself as Mr. Loder, and he is the chief engineer. He reports that since the captain is dead, it's his responsibility now to make the report explaining the incidence. The next survivors to come up are two elderly men, called Forbes and Newall, who look like plumbers by appearance. One has his foot injured, while the other has his hand injured. ...read more.

town to create a situation of corruption and where the enemy is confusing and no one really knows who is good and who is bad. In all those terrible conditions, Scobie struggles as a lonely person, he does not have a proper family, which is very important in one's life. He had a daughter named Catherine, who died at a school in England several years before. On the other hand, his wife Louise; a solitary woman who loves literature and poetry but struggles to form social relationships with the society as well as her husband Scobie. It is Mrs. Helen, whom Scobie falls in love with. I believe that it is due to the circumstances that makes Scobie fall in love with her. Mrs. Helen was married before the ship left its original port and is now a widow. I think, Scobie is trying to seek a companion in this miserable and lonely world, to escape loneliness as he has no one and there is very little left to him since his daughter died and since his wife left him. ...read more.

There, Wilson makes several attacks on Scobie. He is suspicious that Scobie has some kind of a deal with Yusuf because he knows that since Scobie is in visiting terms with Yusef, Yusef is protected, as the rumors around the town suggest. But, Scobie makes it clear to Wilson that he is in visiting terms with Yusef but it wouldn't prevent him from prosecuting him. Wilson is also suspicious about where Scobie got the money from to send Louise to South Africa as he knows he cannot afford it from his salary. He also declares that he kissed Louise but Scobie does not react to Wilson's attacks and tries to avoid talking about it because he doesn't want to turn against Wilson. So, It turns out that Wilson knows quiet a lot about what's going on, he knows Scobie has some kind of a deal with Yusuf and also that Scobie is in love with Mrs. Helen. So this shows some signs of Wilson being a spy, as he even warns Scobie openly "Don't think I haven't got my eye on you" on page 120. ...read more.