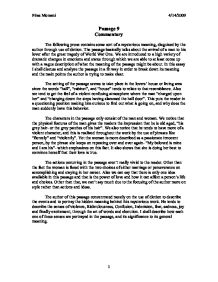 Passage 9 Commentary The following prose contains some sort of a mysterious meaning, disguised by the author through use of diction. The passage basically talks about the arrival of a man to his lover after the great tragedy of World War One. We are introduced to a high variety of dramatic changes in emotions and states through which we are able to at least come up with a vague description of what the meaning of the passage might be about. In this essay I shall discuss and analyze the passage in a fit way in order to break down its meaning and the main points the author is trying to make clear. The setting of the passage seems to take place in the lovers' house or living area since the words "hall", "cabinet", and "house" tends to relate to that resemblance. Also we tend to get the feel of a violent confusing atmosphere where the man "charged upon her" and "charging down the steps having slammed the hall door". This puts the reader in a questioning position making him curious to find out what is going on, and why does the man suddenly have this behavior. ...read more.

In addition, the use of the two words "charged" and "charging" as a sort of repetition to emphasize on that violent trait. Also the use of many words to resemble it as "slammed", "violently", "exclaimed", "panting fiercely", and finally "jumped out of her". We notice how the word "jumped" here is used in an unusual way, in a sense of he was forced to jump. Secondly, the feel of ridiculousness is also produced by the author through the use of diction in the passage. The author mentions the phrase "Too pink where it was pink and too white where it was white", as a resemblance to the man's face which is more clown like, or painted to look doll like. Additionally, the use of the words "fumbly... clumsy" is also used as a resemblance to the man's clown like posture. In addition that, the author also uses the phrase "Like tending your baby!" which shows that despite the threatening behavior of the man he is yet considered to be helpless. And finally the phrase "repeating that ridiculous thing!" this shows how the lady is also acting oddly and weirdly. Moving on to diction used to create the feel of confusion through the passage. ...read more.

And this shows how she is unable to decided or make up her decisions about some judgments that lie before her. Now after discussing the common feelings allocated in the passage, I'm going to move on to discussing the more general use of diction and grammar in the passage. For example, the use of the word "diminutive" makes the man seem to be more powerful and more dominant. We also notice how the sentence structure is very short, and that the author tends to end phrases quickly. This is done to provide the ability to make sudden changes in direction of both themes, and emotions. The author also uses informal language more like the common language spoken 'Colloquial'. In addition we notice how the paragraphs come randomly, displaying how unstructured the passage is and how unorganized the writer made it be. And finally we get a feel that occurring event are kind of dramatic and have a strong impact on the reader. In conclusion, after explaining the whole passage and analyzing it step by step, I think that the passage lacks clarity and comprehension. It could be considered more of a stylistic passage rather than a comprehensive one. Since the author tends to hide the true meaning of the passage, therefore putting many conclusions in the reader's head. ?? ?? ?? ?? Firas Momani 4/14/2009 1 ...read more.