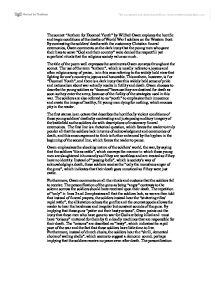 Commentary on Anthem for Doomed Youth by Wilfred Owens

The sonnet "Anthem for Doomed Youth" by Wilfred Owen explores the horrific and tragic conditions of the deaths of World War I soldiers on the Western front. By contrasting the soldiers' deaths with the customary Christian funeral ceremonies, Owen comments on the dark irony that the young men who gave their lives to serve "God and their country" were denied the respectful yet superficial rituals that the religious society value so much. The title of the poem well expresses the sentiments Owen conveys throughout the sonnet. The use of the term "anthem", which is usually refers to a joyous and often religious song of praise, is in this case referring to the widely held view that fighting for one's country is joyous and honorable. This anthem, however, is for "Doomed Youth", and there is a dark irony that this widely held sense of pride and nationalism about war actually results in futility and death. Owen chooses to describe the young soldiers as "doomed" because they are destined for death as soon as they enter the army, because of the futility of the strategies used in this war. ...read more.

The "orisons" are described as "hasty", which indicates the rapid pace of the war and the fact that these soldiers have little time to live. Furthermore, instead of church choirs, the soldiers hear the "shrill, demented choirs of wailing shells", which seems to suggest a demonic sound, perhaps implying that the soldiers receive no peace even after death. The personification of the shells as "wailing" is ironic because the weapons that killed the soldiers sound as if they are mourning for them. Further down the stanza, Owen subtly criticizes the Christian religion and its ceremonies as he describes the funeral customs as "mockeries". This term suggests the irony in the fact that these soldiers, who have given their lives for God and their country, are not able to enjoy these ceremonies that acknowledge their death, even though they may be the ones that most deserve them. The last line of the first stanza foreshadows the coming volta as it shifts the focus from the conditions of death in war to the sadness that the deaths in the war brings to those who knew the soldiers. The sound of the gentle and beautiful "bugles calling" is a sharp contrast from the violent noises of the war but the mention of the "sad shires" seems to imply that this sad calling is coming from anonymous "shires" far away. ...read more.

This substitution of emotions for the ceremonial objects continues in line 13, when the "tenderness of patient minds" metaphorically become these soldiers' flowers. The last line of the poem is very powerful as it concludes the poem by showing how the deaths of the soldiers are being acknowledged in a way far superior to the religious ceremonies. Owen depicts the way in which instead of having the "drawing-down of blinds", that is a traditional act of acknowledging their death, all of nature is metaphorically drawing the blinds by slowly becoming dark in a "slow dusk". The adjective "slow" conveys the respect that all of nature is paying to these brave men, even as society forgets about them. Ultimately, Owen takes the reader through an incredible journey in this short but deep sonnet. He conveys the the horrors of war and depicts all the religious ceremony that these soldiers are ironically denied off. However, towards the end of the poem, Owen brings us to realize the strength of the emotions and sorrow of those who loved these youth as their raw feelings became the soldiers' funeral. Although the poem is bleak and dark throughout, the last stanza is poignant and heartrending as we realize that emotions and love are stronger and more important than any customs or traditions. ...read more.