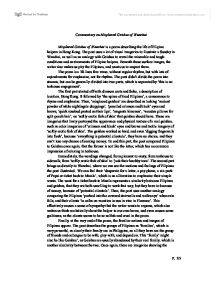 Commentary on Misplaced Geishas of Wanchai

Commentary on Misplaced Geishas of Wanchai Misplaced Geishas of Wanchai is a poem describing the life of Filipino helpers in Hong Kong. The poet uses a lot of visual imageries to illustrate a Sunday in Wanchai, as well as an analogy with Geishas to reveal the miserable and tough conditions and environments of Filipino helpers. Beneath these surface images, the writer also makes us pity the Filipinos, and wants us to respect them. The poem is a 38-lines free verse, without regular rhythm, but with lots of enjambments for emphasize, not for rhythm. The poet didn't divide the poem into stanzas, but can be generally divided into two parts, which is separated by 'this is no teahouse engagement'. The first part started off with dimsum carts and Soho, a description of location, Hong Kong. It followed by 'the spires of tired Filipinas', a consonance to rhyme and emphasize. Then, 'misplaced geishas' are described as lacking 'ancient powder of white nightingale droppings', 'penciled crimson and black' eyes and brows, 'quick rosebud panted on their lips', 'magenta kimonos', 'wooden pillows for split-peach hair', no 'softly erotic fork of skin' that geishas should have. ...read more.

Then, the poet uses another analogy comparing the Filipinas 'packed into the covered stairwells and walkways' when rain falls, and their clients 'in cafes on vacation in sun in vino in Florence'. This effectively causes a sense of sympathy that the writer wants to express, which also makes us think realistically about the helper in our own home, and even causes some guiltiness, as the clients seems to be so selfish and cruel in the poem. Finally, at the very end of the poem, the familiar actions and images of Filipinas appear. The poet describes the groups of Filipinas as 'families', which is very powerful, as clearly their family are in Philippine, so all they have are the group of friends and colleague to be with, play with, and depend on. This 'family' might also be like Geishas', as Geishas are usually abandoned by their real family, which is another similarity between the two. Once again, there are imageries showing the actions of the families, and most are ugly and unhygienic. One example will be they are 'lunging sturdy fingers into tubs of peanut butter from 7 eleven or Circle K', which is quite disgusting to imagine. ...read more.

painted on their lips, without magenta kimonos or wooden pillows for split-peach hair, without revealing the softly erotic fork of skin, unpainted up the back they wince and pull, digging fingernails into flesh because eveything is potential clientelle - this is no teahouse engagement - they jack their knobby toes on the sidewalk like the mangled kittens stalking the same avenue hungrier and sicker but no less desperate for a letter, a pay phone, a six pack of pepsi or ticket back to manila. Now rain falls in shards and they are packed into the covered stairwell and walkways as tight as their clients in cafes on vacation in sun in vino in florence, but here they squat over newspapers, whole families playing cards and plunging sturdy fingers into tubs of peanut butter from 7 eleven or circle K amidst the sick flanks of day-old beef swinging clockwise on iron blasted hooks, meat cleavers tossing scraps of light and dancing deep into brutish lumps of pig feet and eel and the enormous ox tongue there hooked, for-sale. They lick another evening of sweaty air and dodge the air-conditioners, spitting the clear and copious residue of the night P. 1/1 ...read more.