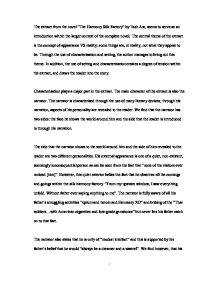 The extract from the novel "The Harmony Silk Factory" by Tash Aw, seems to serve as an introduction within the larger context of the complete novel. The central theme of the extract is the concept of appearance VS reality; some things are, in reality, not what they appear to be. Through the use of characterisation and setting, the author manages to bring out this theme. In addition, the use of setting and characterisation creates a degree of tension within the extract, and draws the reader into the story. Characterisation plays a major part in the extract. The main character of the extract is also the narrator. The narrator is characterised through the use of many literary devices; through his narration, aspects of his personality are revealed to the reader. We find that the narrator has two sides: the face he shows the world around him and the side that the reader is introduced to through his narration. The side that the narrator shows to the world around him and the side of him revealed to the reader are two different personalities. His external appearance is one of a quiet, non-existent, seemingly inconsequential person as can be seen from the fact that "none of the visitors ever noticed [him]". However, this quiet exterior belies the fact that he observes all the comings and goings within the silk harmony factory. "From my upstairs window, I saw everything unfold. ...read more.

The theme of appearance VS reality is manifested in the physical setting of the Harmony Silk Factory. The characterisation and setting, besides bringing out the theme of the appearance VS reality, also serves to create tension in the story and cause the reader to want to read on. The setting of the house, with its "small mossy courtyard which never got enough sunlight" gives the location of the extract an air of mystery; the lack of light and dampness of the place (as can be seen by the growth of moss) further builds upon the mysteriousness of the setting. This description appears in the first line of the extract, and the reader's curiosity is pricked as to what actually goes on within the Harmony Silk factory. Also, the characterisation of the narrator serves to lead the reader on to read the rest of the novel. How is this achieved? Firstly, the narrator is a nameless, 1st person narrator. The use of the 1st person narration serves to give the tone of the extract a feeling of intimacy, or closeness to the subject matter. At the same time, his lack of a name distances him from the reader, again creating an air of mystery which surrounds him. Secondly, the tone of the narrator is very "matter-of-fact". He describes somewhat shocking, illegal proceeds with the same tone one would use to describe everyday activities. He matter-of-factly states "Mainly he smuggles opium and heroin and Hennessy XO" and "I knew what he was up to and whom he was with". ...read more.

The narrator's self-deprecating and quirky way of narrating serves to endear the narrator to the reader. We also discover certain facts about his childhood through his narration. At no point in the extract does a narrator mention his mother. This may only be a conjecture, but the lack of a motherly figure in his life, a lack of love, may have contributed to his strange and unusual way of narrating and also his self-deprecating attitude. Also, we find that he may have endured physical abuse as a child from the line "I had become used to this kind of punishment" in response to his father twisting his ear. This makes the reader increasingly sympathetic to the narrator as the narrative progresses. Thus, when the narrator begins using melodrama to capture the attention of the reader and lead the reader on to the rest of the novel, the reader follows with little resistance. This characterisation and narration, coupled with the mysterious atmosphere created by the setting, creates a sort of tension which compels the reader to read on. It engages the reader and draws the reader into the world the author has created. As we have seen characterisation and setting both have a dual purpose. If this extract is the beginning of the novel, then the author has succeeded in drawing the reader into the novel. By using both characterisation and setting to bring out the theme and simultaneously create tension, the author has succeeded in creating a world with characters that engage readers and has successfully written an effective and exciting beginning to the novel. ?? ?? ?? ?? 1 ...read more.