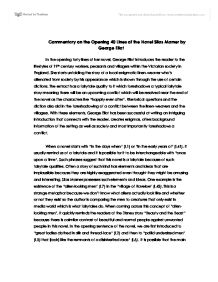 Commentary on the Opening 40 Lines of the Novel Silas Marner by George Eliot In the opening forty lines of her novel, George Eliot introduces the reader to the lifestyles of 19th century workers, peasants and villagers within the Victorian society in England. She starts unfolding the story of a local enigmatic linen-weaver who's alienated from society by his appearance which is shown through the use of certain dictions. The extract has a fairytale quality to it which foreshadows a typical fairytale story meaning there will be an upcoming conflict which will be resolved near the end of the novel as the characters live "happily ever after". Rhetorical questions and the diction also aid in the foreshadowing of a conflict between the linen-weavers and the villagers. With these elements, George Eliot has been successful at writing an intriguing introduction that connects with the reader, creates enigmas, offers background information of the setting as well as society and most importantly foreshadows a conflict. When a novel starts with "in the days when" (l.1) or "in the early years of" (l.41), it usually remind us of a fairytale and it is possible for it to be interchangeable with "once upon a time". ...read more.

Coincidently the last sentence of the novel is "what a pretty home ours is! I think nobody could be happier than we are." This 'happily ever after' ending gives us another justification that the novel can also be categorized as a relatively modern fairytale. Most importantly this is how George Eliot can connect with the readers because it is something that the readers are accustomed to and familiar with. Rhetorical questions are used to get the reader thinking about an obvious answer and it could be used as another form of a metaphor. George Eliot uses rhetorical questions as metaphors in the opening of the novel and they all related to the concept of the "alien-looking men". "For what dog likes a figure bent under a heavy bag?" (l.8-9) The 'figure bent' is a linen-weaver carrying thread and the rhetorical question implies that even dogs won't look at such 'alien-looking men' (l.7). Their appearance is highly exaggerated and also the rhetorical question assumes that the weavers are weak because they are walking bent when only carrying thread needed to weave. Another rhetorical question that the author uses to expand the idea of the 'alien looking men' is "how was a man to be explained unless you at least knew somebody who knew his father and mother?" (l.19-20) ...read more.

(l.34) These ideas suggest that since the villagers lack dexterity, they see the linen-weavers as "aliens" and they are too dumb to realize the reasons why they are who they are. For example they could be so pallid because they work indoors in farmhouses most of the time so they are not exposed to the sun. Also the reason why they are undersized and weak is because they are just weavers and they might not have enough money to spend on nutritious food and they probably work all day so they don't get enough energy from things like food and sleep. Such things are common sense which the villagers don't get and because of this, conflicts could arise between the linen-weavers and the villagers. With the use of fairytale qualities that foreshadows conflicts, rhetorical questions that explain the situation of the linen-weavers and the diction that creates visual imagery of the village of Raveloe which also foreshadows conflict, George Eliot has been very effective in writing this opening to the novel Silas Marner. These paragraphs have everything that a good opening should have which are enigmas that leaves us pondering if this novel is going to be a fairytale or not, connections are made with the reader, background information of the setting and foreshadowing of a possible conflict that involves the distrust and tension between the villagers and the linen-weavers. ...read more.