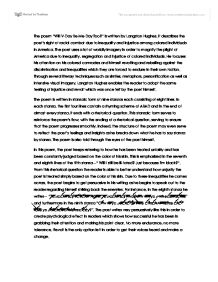 Commentary on the poem &quot;Will V-day be Me day too?&quot;

The poem "Will V-Day Be Me-Day Too?" is written by Langston Hughes. It describes the poet's sight of racial combat due to inequality and injustice among colored individuals in America. The poet uses a lot of worldly imagery in order to magnify the plight of America due to inequality, segregation and injustice of colored individuals. He focuses his attention on his colored comrades and himself revolting and rebelling against the discrimination and inequalities which they are forced to endure in their own Nation. Through several literary techniques such as similes, metaphors, personification as well as intensive visual imagery, Langston Hughes enables the reader to adopt the same feeling of injustice and revolt which was once felt by the poet himself. The poem is written in stanzaic form of nine stanzas each consisting of eight lines. In each stanza, the first four lines contain a rhyming scheme of ABAD and in the end of almost every stanza, it ends with a rhetorical question. ...read more.

For instance he writes--- Or will you do me as the Germans did the Jews? When I've helped this world to save, shall I still be color's slave?". The poet compares himself with the Jews and compares white skinned Americans as the Nazi Germans who brutally tortured the Jews even after they were promised freedom through much diligence. What the poet is trying to imply through this simile is that he thinks of himself as a trapped individual in his own nation and even through constant tediousness and diligence, he still would not be treated equally nor be granted liberty. Hughes also uses metaphors in his poem in order to catch the reader's attention. For instance he says in the first stanza ---"I'm a Tan-skinned Yank, driving a tank. I ask,WILL V-DAY BE ME-DAY, TOO?". We can see how the poet fuses a metaphor with a rhetorical question. What the poet is trying to imply through this is how he is the dark skinned rebel and how he is going to fight back in order to get his one and only desire, which is not to be judged based on his skin and be treated equally in society. ...read more.

What the poet is trying to convey to the reader through this simile is that his triumph can never be celebrated if he is herded away in Jim Crow's car after the fight is finished and if he is herded away in Jim Crow's car, all his hard work of fighting for liberty and justice would be for nothing. To conclude, Langston Hughes uses a range of stylistic devices in this poem in order to describe his sight of racial combat due to inequality and injustice among colored individuals in America. We are also able to catch the presence of intensive visual imagery in this poem which the poet uses in order to enhance the plight of America due to segregation, inequality and injustice among colored individuals. Hughes also makes reference to Jim Crow (a notorious individual who created rules that never treated black individuals equally) and speaks against him in his poem. Therefore through the poet's usage of various stylistic devices, the reader is able to adopt a better understanding of the injustice, inequality and revolt which the poet has felt. ...read more.