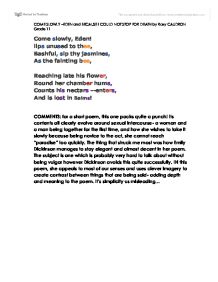 Come slowly, Eden[r1][r2][r3]! lips unused to thee[r4],[r5] Bashful[r6], sip thy jasmines[r7][r8][r9], As the [r10]fainting bee[r11],[r12] Reaching late his flower,[r13][r14] Round her chamber hums[r15],[r16] Counts his nectars --enters[r17][r18], And is lost in B[r19]alms![r20][r21][r22] COMMENTS: for a short poem, this one packs quite a punch! Its contents all clearly evolve around sexual intercourse- a woman and a man being together for the first time, and how she wishes to take it slowly because being novice to the act, she cannot reach "paradise" too quickly. The thing that struck me most was how Emily Dickinson manages to stay elegant and almost decent in her poem. The subject is one which is probably very hard to talk about without being vulgar however Dickinson avoids this quite successfully. IN this poem, she appeals to most of our senses and uses clever imagery to create contrast between things that are being said- adding depth and meaning to the poem. It's simplicity us misleading... BECAUSE I COULD NOT STOP FOR DEATH Bec[R23]ause I could not stop for Death[R24][R25], He kindly stopped for me[R26]; The carriage hel[R27]d but just ourselves And Immortality[R28][R29]. We slowly drove, h[R30]e kn[R31]ew no haste[R32], And I had put away My l[R33]abor, and my leisure too, For his civility[R34]. We passed[R35] the school[R36], where children strove At recess, in the ri[R37]ng; We passed the fields[R38] of gazing[R39] grain, We passed the setting sun[R40]. [R41] Or rather, he passed [R42]us; The dew[R43]s grew quivering and chill, For only gossamer my gown[R44], My tippet only tulle.[R45] We paused before a house[R46] that seemed A swelling of the ground; The roof was scarcely visible,[R47] The cornice but a mound. ...read more.

Perhaps both poems conclude with one reaching some form of paradise but the ways in which this is achieved are very different. Needless to say, both poems are quite deep in meaning (perhaps one more than the other...) and carry an important message. The imagery employed in each poem is quite simple and used to disguise serious topics. "Come Slowly- Eden" however, does this in a much more subtle and clever manner. Rarely would I have thought to use the imagery of something as innocent as a bee and a flower to describe the reaching of "sexual paradise", the 7th heaven if you will... It is the oddness of this use of common imagery which adds complexity, depth and captures one's attention in such a poem. The second poem also uses simple imagery but the tone throughout is so calm, just like Dickinson's acceptance of death, that there's not a clear climax to the poem and it just continually flows just like the natural flow of life until it is wrapped up into an easy conclusion- death. Unlike the first, the second poem uses no capitalization or dashes to create emphasis on certain things such as the "entering" in "Come Slowly- Eden". This emphasis on certain parts denotes some form of climax and change of tone (in the second verse of Poem 1) which leaves the reader entranced and caught up in the rhythm. And I believe that it is this unusual figurative language that is therefore somewhat more efficient in rallying the reader's emotions and help us really appreciate what is being said. ...read more.

[R23]Repeating 'C' sounds- assonance. Gives the poem flow. [R24]From 'death' to 'he' - personification and a metaphor. [R25]Death is The suitor who comes calling for the narrator to escort her to eternity. [R26]Rhyming pattern ABCB [R27]hELd and oursElves- there is internal rhyme present here [R28]Last words of stanza 1 and 2 rhyme. [R29]Is immortality also a passenger in the carriage? [R30]Repeated H sounds- alliteration. [R31]KNew NO - alliteration. [R32]She seems to be calmly accepting death [R33]Repeated L sounds- alliteration. [R34]Civility- refering to politeness. [R35]REPETITION of the phrase " we passed " is anaphora [R36]SCHOO L ; here is meant to symbolize the beginning or early yers of life, so things such as childhood [R37]Repeated R sounds = alliteration. [R38]The fields represent the " middle period " of life in which you find the working years and adulthood [R39]Gazing : ripe [R40]The setting sun is representing death, the end of life. [R41]Speaking of her life journey and comparing it with the voyage she travels wit death in the carriage. [R42]HE is the sun- it's personification. [R43]Internal rhyme - dEWs and grEW [R44]Gossamer gown= the wedding dress for marrying death... [R45]She seems to WELCOME death and consider it as someone she is marrying... [R46]House= her tomb where she will be for eternity [R47]Commenting on how the 'house' is small and barely visible because it is a tomb and not a house. [R48]She died centuries ago [R49]Paradox where a century is shorter than a day [R50]con ?? ?? ?? ?? COME SLOWLY -EDEN and BECAUSE I COULD NOT STOP FOR DEATH by Roxy CAUDRON Grade 11 ...read more.