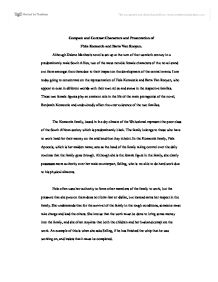 Compare and Contrast Characters and Presentation of Fiela Komoetie and Barta Van Rooyen. Although Dalene Matthee's novel is set up at the turn of the twentieth century in a predominantly male South Africa, two of the most notable female characters of the novel stand out from amongst the others due to their impact on the development of the central events. I am today going to concentrate on the representation of Fiela Komoetie and Barta Van Rooyen, who appear to exist in different worlds with their own roles and status in the respective families. These two female figures play an eminent role in the life of the main protagonist of the novel, Benjamin Komoetie and undoubtedly affect the utter existence of the two families. The Komoetie family, based in the dry climate of the Wolwekraal represent the poor class of the South African society which is predominantly black. The family belongs to those who have to work hard for their money on the arid land that they inhabit. In the Komoetie family, Fiela Apoools, which is her maiden name, acts as the head of the family taking control over the daily routines that the family goes through. Although she is the female figure in the family, she clearly possesses more authority over her male counterpart, Selling, who is no able to do hard work due to his physical ailments. Fiela often uses her authority to force other members of the family to work, but the pressure that she puts on them does not form fear or dislike, but instead earns her respect in the family. ...read more.

Barta Van Rooyen who lives in the thick forests of Knysna is brought in complete contrast to Fiela Komoetie. Although she does not often make appearance during the course of the novel, she can be considered as one of the most influential characters. We do not get to see the story from her point of view, and nor does the author present us with her stream of consciousness. Despite receiving almost no information about Barta's character, judging her by her actions, we can clearly draw a line between her and Fiela. Barta does not act as the head of the Van Rooyen family, and instead submits to the authority of Elias, as she allows herself to fall into the control of the husband. This is a vivid display of her weak character and low confidence, as she accepts the rules of the forest by following every command of her husband. She almost never tries to object to Elias's decisions, and follows his orders. This can be observed in the excerpt when she and Elias make their way through the forest to the magistrate, when Barta complains about pain in her legs but keeps on going due to the fact that she is under constant pressure from her husband saying: "you must hurry up Barta" and "come on Barta, come on". Another example of this is when she tries to step in for Benjamin and stop Elias from beating him by saying "the magistrate might send the forester to come and check how he is getting ...read more.

Barta, despite being in the house all the time, barely speaks, and this is mainly due to the fact that Elias subjugates her. Fiela on the other hand always speaks her mind and is ready to defend her own ideals and protest against injustice. This can been in her persistent attempt to face the magistrate as she tries to prove that I quote: "there must be some kind of a mistake. Benjamin has known no mother except Fiela Komoetie". Here, she clearly protests against the decision of the magistrate, showing that she does not ever refrain from standing for what she believes in. Although these two characters officially possess the status of a wife and a mother, the various events in their lives have forced them to take over a special role in the family. Fiela Komoetie is presented as a confident, stubborn, faithful and a forever-hopeful person. This is shown throughout the text, as she never gives up defending Bejamin, I quote : " as a tigress defends her young". She is also reliable and responsible for the survival of her family, showing her strong character and will. On the other hand Barta Van Rooyen remains a ghost throughout the novel in the dark Knysna forest. She is a complacent and inconsiderate mother as she does not step in for her children, and constantly allows herself to be crushed by the authority of her husband. Daleene Matthee creates this constrast to underline the importance of faithfulness, hope and love for survival in one of the most troublesome times of South Africa. ...read more.