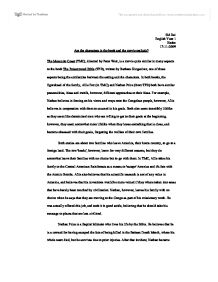 Sid Rai English Year 1 Haske 17-11-2009 Are the characters in the book and the movie realistic? The Mosquito Coast (TMC), directed by Peter Weir, is a movie quite similar in many aspects to the book The Poisonwood Bible (TPB), written by Barbara Kingsolver, one of those aspects being the similarities between the setting and the characters. In both books, the figurehead of the family, Allie Fox (in TMC) and Nathan Price (from TPB) both have similar personalities, ideas and motifs, however, different approaches to their ideas. For example, Nathan believes in forcing on his views and ways onto the Congolese people, however, Allie believes in cooperation with them to succeed in his goals. Both also seem incredibly lifelike as they seem like determined men who are willing to get to their goals at the beginning, however, they seem somewhat more lifelike when they loose something that is close, and become obsessed with their goals, forgetting the welfare of their own families. Both stories are about two families who leave America, their home country, to go to a foreign land. The two 'heads', however, leave for very different reasons, but they do somewhat leave their families with no choice but to go with them. In TMC, Allie takes his family to the Central American Rainforests as a means to 'escape' America and it's fate with the Atomic Bombs. ...read more.

As time passes by, and he sees not much crowd in the Church, he slightly looses his mind and then decides that all his obstacles where placed by God to deter him and to test him. This is very contrary to what Allie does at the beginning of the movie. Although he may have moved from the USA and dragged his family along, he decides to take a different approach into making his way into the local's hearts. Where Nathan attempted to force his ways onto the locals and believed that he was superior, Allie decided to work with them. He said before the project began '"If I don't work hard enough, you tell me. I am not your boss, I am your friend, and I want to work for you...'". He may have planned out the project, but he certainly did work as though he were under instructions to do what he was told. He seemed very cooperative, and whenever Mother Fox got any materials to share, she enhanced her husbands' popularity by sharing those goods, for example the cloth she was given by the missionaries. She made clothes for her daughters and noticed that Mr. Haddy, a local, was eyeing the cloth, she decided to make one for him. In the next scene, it shows that everyone on that small island was wearing the same yellow piece of cloth in some shape of form. ...read more.

This made Mother question Nathan's morality, whereupon the lack of enthusiasm spreads across the whole family. Allie goes from being a friend to a leader almost spontaneously. Orleanna starts to make plans of escape immediately after she gets better from hearing the news of the Congo going into an election period and that her family was staying through it, due to her husband's arrogance. She does eventually leave him, however, Nathan changes slightly in a way one may perceive apologetic. Allie, after burning Reverend Spellgood's church bell, goes back to see his family leaving him, and says that they couldn't live without them. When he gets shot, their family escapes with his injured body on the boat. All the characters in both the book and the movie seem incredibly lifelike as the stereotypical family is put into extreme conditions. This causes the stereotypical families, which generally include of the male being the leader of the house, the bread earner, and the females being the followers, commanding her children to follow her father and herself. This changes very quickly when the two families go through some trouble in their respective environments, causing the males to get angrier and the females to look out for the welfare of her children more than anything. Both men forget about the opinion of their families (Nathan, of course, not caring about their opinion anyways), and seem set on doing everything possible, except return to the life of luxury. ...read more.