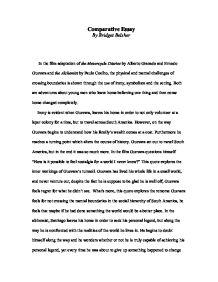 Comparison of the motorcycle diaries and the Alchemist

Comparative Essay By Bridget Belsher In the film adaptation of the Motorcycle Diaries by Alberto Granado and Ernesto Guevara and the Alchemist by Paulo Coelho, the physical and mental challenges of crossing boundaries is shown through the use of irony, symbolism and the setting. Both are adventures about young men who leave home believing one thing and then come home changed completely. Irony is evident when Guevara, leaves his home in order to not only volunteer at a leper colony for a time, but to travel across South America. However, on the way Guevara begins to understand how his family's wealth comes at a cost. Furthermore he reaches a turning point which alters the course of history. Guevara set out to travel South America, but in the end it was so much more. In the film Guevara questions himself "How is it possible to feel nostalgia for a world I never knew?" ...read more.

Ironically, in the end Santiago finds that his treasure was exactly where he started. Both the alchemist and the motorcycle diaries feature Spanish Main characters that start out believing one thing but in the end have a view on the world that is completely opposite. Furthermore Guevara and Santiago also both doubt themselves, thinking all is lost at certain point, yet ironically they always manage to pick themselves up and keep going. Both characters are crossing physical and mental boundaries; both are travelling to places they'd never thought they'd see and becoming people beyond there original fa�ade of personality In both of the compared, the main character preformed a physically impossible task, its meaning went beyond the literal meaning. In the alchemist Santiago turned himself into the wind. This is a task that in Santiago's world was termed impossible, yet Santiago managed to do it, not by coincidence but by believing he could do it. ...read more.

Guevara by swimming across the river that segregated the sick from the non sick at sano Paulo leprosy reserve, displays a vital quality that he cares more about human dignity then social norms. This symbolises the change in Guevara, from an ignorant university student, to an enlightened man of the world. Guevara, by crossing the river, also crossed the cultural boundaries; by refusing to do what everyone else did just because it had always been done that way. Santiago and Guevara cross boundaries both physically and culturally, by accomplishing the impossible and doing what they believed was right. In conclusion, the alchemist and the motorcycle diaries display conceding attributes which not only enhance the quality of the works, but emphasize the meaning behind them. Moreover this quality is furthered by the use of multiple literary devices of which add sophistication to the overall end product. Irony and symbolism throughout the Alchemist and the Motorcycle Diaries highlight important events within the works. ...read more.