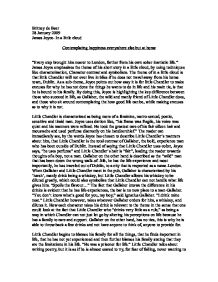 Britney de Beer 28 January 2009 James Joyce- In a little cloud Contemplating happiness everywhere else but at home "Every step brought him nearer to London, farther from his own sober inartistic life." James Joyce emphasizes the theme of his short story in a little cloud, by using techniques like characterization, Character contrast and symbolism. The theme of in a little cloud is that little Chandler will not ever live in bliss if he does not travel away from his home town, Dublin. As a sub-theme, Joyce points out how easy it is for little Chandler to make excuses for why he has not done the things he wants to do in life and his main tie, is that he is bound to his family. By doing this, Joyce is highlighting the key difference between those who succeed in life, as Gallaher, the wild and manly friend of Little Chandler does, and those who sit around contemplating the how good life can be, while making excuses as to why it is not. Little Chandler is characterized as being more of a feminine, metro-sexual, poetic, sensitive and timid man. Joyce uses diction like, "his frame was fragile, his voice was quiet and his manners were refined. He took the greatest care of his fair silken hair and moustache and used perfume discreetly on his handkerchief." ...read more.

"He was a prisoner for life." Little Chandler talks about writing poetry, but it is as if he is almost scared to try, for fear of failing, never wanting to take the risk of creating something for then he is opening himself up to be judged. "He could not sway the crowd but he might appeal to a little circle of kinder minds." Little Chandler is too scared to do what he wants to do in life. His poetry writing is evident of his whole life, not jus his writing. He looks for excuses as to why he cannot do things, or as to why he is not somewhere else; instead of looking for solutions to the limitations, he creates himself. "He tried to way his soul to see if it was a poet's soul." Little Chandler points fingers in all directions as to why he has not made more of your life, and he does this because he notices and compares his life with the life Gallaher is living. A man with no one to support or look after other than himself, no partner to reproduce with and carry out his biological function- reproducing, and no real structure in the sense that he has no ties holding him down. ...read more.

Gallaher has made sure not to limit himself by carrying out his biological function of procreation yet because he knows that this will end many of the pleasurable freedoms he now has. Little Chandler looks upon Gallaher as having the life he dreams of having. Little chandler would love the freedom and confidence Gallaher has. "He chose the darkest and narrowest streets and, as he walked boldly forward, the silence that was spread about his footsteps troubled him..." Little Chandler is trying to be more of a man, trying to let his little fears go, but he is unable to, "...the wandering silent figures troubled him; and at times a sound of low fugitive laughter made him tremble like a leaf." Little Chandler still had that child like fear inside him. Little Chandler's son, symbolizes himself at the end of the writing. Rather, the son symbolizes the inner conflict Little Chandler has with himself. The fact that he is so dependent on others for life, yet being "imprisoned" by others and the limitations they offer. This is relevant to the theme because, the child represents the inner conflict Little Chandler has with himself, and Little Chandler represents other human beings that face limitations they create for themselves, namingly the limitation of family. With any family comes responsibilities and with every responsibility comes limitations. We cannot have one without the other. ...read more.