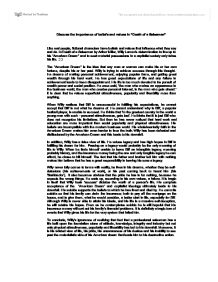 Discuss the importance of beliefs and values in "Death of a Salesman" Like real people, fictional characters have beliefs and values that influence what they say and do. In Death of a Salesman by Arthur Miller, Willy Loman's determination to live up to his "American Dream" and to seek material possessions in a capitalist society only takes his life. ?? The "American Dream" is the idea that any man or woman can make his or her own fortune, despite his or her past. Willy is trying to achieve success through this thought. He dreams of making personal achievement, enjoying popular fame, and getting great wealth through his hard work. He has great expectations of life and any failure in achievement leads to keen disappointment. ...read more.

His beliefs are incompatible with the modern business world. His wholeheartedly faith in the American Dream makes him even harder to face the truth. Willy has been defeated and disillusioned by the American Dream and this leads to his downfall. In addition, Willy has a false view of life. He values legacy and has high hopes in Biff in fulfilling his dream for him. Passing on a legacy would probably be the only meaning of life to Willy. When he finds himself unable to leave Biff an intangible legacy, meaning probably history, and the insurance money being the one and only tangible legacy he can afford, he chose to kill himself. The fact that his father and brother left him with nothing makes him believe that he has a great responsibility in leaving his sons a legacy. ...read more.

Although Willy is never able to attain his ideals, and his life is a massive self-deception, he still retains his hopes. Even as he contemplates suicide he is still hopeful that his insurance money will sort out his family's financial problems. It is definitely a tragic turn of events that Willy gives his life for the very system that failed him. To conclude, Willy's ignorance of realizing that fact that a professional salesman has a life built upon the foundation stone of attitude, knowledge, integrity and industry but not only physical attractiveness, popularity and likeability has led to his downfall. Moreover, it is his twisted view of life, his pride, his unawareness of his desires and his inability to see past the materialistic side of his American dream that leads him to his destructive action. ...read more.