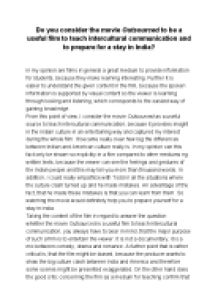 Do you consider the movie Outsourced to be a useful film to teach intercultural communication and to prepare for a stay in India?

﻿Do you consider the movie Outsourced to be a useful film to teach intercultural communication and to prepare for a stay in India? In my opinion are films in general a great medium to provide information for students, because they make learning interesting. Further it is easier to understand the given content in the film, because the spoken information is supported by visual content so the viewer is learning through looking and listening, which corresponds to the easiest way of gaining knowledge. From this point of view, I consider the movie Outsourced as a useful source to teach intercultural communication, because it provides insight in the Indian culture in an entertaining way and captured my interest during the whole film. ...read more.

It is not a documentary, it is a mix between comedy, drama and romance. A further point that is rather critical is, that the film might be biased, because the producer wants to show the big culture clash between India and America and therefore some scenes might be presented exaggerated. On the other hand does the good critic concerning the film as a medium for teaching confirm that most of the scenes are quiet realistic. The movie Outsourced is in my opinion useful for informing about intercultural communication, because it mentions a wide variety of aspects in Indian culture, even if some are only explained shortly. The film covers the religious part: The Hinduism is explained briefly and the festival Holy is introduced. ...read more.

That point gives the film a high value for us, because American culture and the German one are in a lot of aspects similar. So we would probably experience India in the same way Todd does in the film. Through the experiences of Todd and especially from Asha?s advices to Todd how to get to like India, you learn a lot that might be helpful for preparing a stay in India, because then you already know some essential points about India and you are familiar with its customs and traditions. All in all I see the movie outsourced as a useful film to teach intercultural communications and I would recommend everybody who is going to India to watch the movie to get a first general impression about the customs and traditions in India. However in the end one has to make his own experience in a foreign culture ...read more.