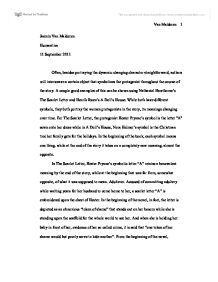 Jasmin Van Malderen Humanities 11 September 2011 Often, besides portraying the dynamic changing character straightforward, authors will interweave a certain object that symbolizes the protagonist throughout the course of the story. A couple good examples of this can be shown using Nathanial Hawthorne's The Scarlet Letter and Henrik Ibsen's A Doll's House. While both have different symbols, they both portray the women protagonists in the story, its meanings changing over time. For The Scarlet Letter, the protagonist Hester Prynne's symbol is the letter "A" sewn onto her dress while in A Doll's House, Nora Helmer's symbol is the Christmas tree her family gets for the holidays. In the beginning of the book, each symbol means one thing, while at the end of the story it takes on a completely new meaning, almost the opposite. In The Scarlet Letter, Hester Prynne's symbolic letter "A" retains a benevolent meaning by the end of the story, while at the beginning that was far from, somewhat opposite, of what it was supposed to mean. ...read more.

The symbol not only becomes forgotten and disregarded; it becomes almost sacred and symbolizes someone of a higher status. Described with a positive connotation, "glittering in its fantastic embroidery", the letter is now a familiar object to the townspeople. Hester became a shoulder to cry on; one to aid those in need, feed the poor, and cure the sick. Able. In A Doll's House, what Nora goes through is almost opposite of what happens to Hester. While Hester slowly increases her status in society, Nora Helmer deteriorates along with the Christmas tree throughout the course of the short play. This is clearly seen by examining minute descriptions, stage directions and clear physical depictions of both Nora and the Christmas tree. The tree is somewhat mentioned in every scene, nonchalantly in the background of where the action is taking place. From the beginning of the play, when the porter is helping her bring the tree in, to throughout the play when she is slowly decorating the tree little by little, the tree is noticed one way or another. ...read more.

They will all be revealed to-night when the Christmas tree is lit, no doubt." This is what could be the beginning of where the parallelism between Nora and the tree actually starts. Interestingly, although this is before the part where the reader actually knows about Nora's lies and what Krogstad has on her, once looked back upon this part can be seen as a defining beginning to the symbolism. Although the symbols portrayed the main character in each novel, their meanings changed in different ways, one positively and the other negatively. In The Scarlet Letter, the meaning symbolic letter "A" changed from adulterer to able, upbringing Hester's position in society from one of shame to one people could look up to. On the other hand, in A Doll's House, the physical state of the Christmas tree slowly worsens over the course of the play, representing the decline of Nora's psychological state. While one woman had more luck than the other in the fact that her symbol changed for the better, the style of writing in terms of symbolism that both Hawthorne and Ibsen had were very similar. ?? ?? ?? ?? 1 Van Malderen ...read more.