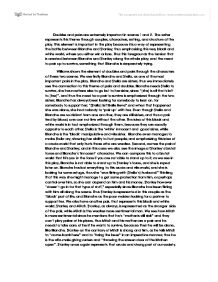 Doubles and pairs in A Streetcar Named Desire

Doubles and pairs are extremely important in scenes 1 and 2. The writer represents this theme through couples, characters, setting, and structure of the play. This element is important in the play because it is a way of representing the battle between Blanche and Stanley; thus emphasizing this very black and white world, where you either win or lose. Thus this foregrounds the tension that is created between Blanche and Stanley along the whole play; and the need to pair up to survive, something that Blanche is desperately trying. Williams shows the element of doubles and pairs through the characters of these two scenes. We see firstly Blanche and Stella, as one of the most important pairs in the play. Blanche and Stella are sisters, thus we immediately see the connection to this theme of pairs and doubles. Blanche needs Stella to survive, she has nowhere else to go but to her sister, since "[she] is all that's left to [her]", and thus the need for a pair to survive is emphasized through the two sisters. Blanche has always been looking for somebody to lean on, for somebody to support her; "[Stella] left Belle Reve" and when that happened she was alone, she had nobody to 'pair up' with her. ...read more.

So, we see how each pair of characters plays its role in this play in portraying the crude reality of this black and white world we live in. Williams also uses couples to express this theme of doubles and pairs in the play. The firs couple, and most important one is Stella and Stanley; we see how important they are to one another; especially Stanley Stella. Being a couple is a way of surviving, something that Blanche is finding hard because she is alone. Stella depends on Stanley a lot, since he is the one who works and brings the money home; and not only money, "meat" as well, to eat. When he is out travelling Stella "can barely stand it," and when he comes back she "cries in his lap like a baby." So, we see how they Stella depends on Stanley, without him she would be lost in this cruel world, like Blanche is now. The second important couple in this play is Steve and Eunice, who reflect the great marriage that Stella and Stanley have. Both Steve and Eunice depend on each other to survive, since Eunice cooks for him a "dish of spaghetti" while he is supposed to bring the food home; sometimes however he has to take a "poor boy's sandwitch" because he forgets to buy food. ...read more.

Stanley notices this, and mentions that "liquor goes fast in hot weather," hinting that he knows that she took some. Not only that, but she has invaded his privacy with Stella as she will be sleeping on the only bed in the house, and Stanley is not very content about this. In scene two, it is Stanley who invades Blanche's space, as a sort of revenge. He does "a fast job" unpacking her bag, and going through it to find "them papers" for the loss of Belle Reve. We see how both structures of these two scenes match perfectly, as firstly she invades his space, and then he invades her. Another example of pairing up in the structure is the fact that Stanley wins the argument in the first scene, while Blanche wins the argument in the second scene. Stanley has noticed this invasion of space and his liquor, and he tries to remain calm, but to let her know that he is the 'men' in the house. He hints that "some people rarely touch it, but it touches them often," referring to the liquor. Here he cuts Blanche off completely, letting her know that he is already aware of the situation, and he is not the type of person to be fooled; thus he wins the argument. In scene 2, Blanc ...read more.