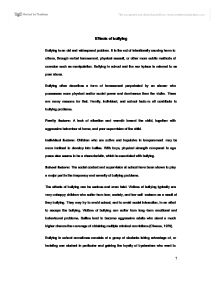 Effects of bullying Bullying is an old and widespread problem. It is the act of intentionally causing harm to others, through verbal harassment, physical assault, or other more subtle methods of coercion such as manipulation. Bullying in school and the workplace is referred to as peer abuse. Bullying often describes a form of harassment perpetrated by an abuser who possesses more physical and/or social power and dominance than the victim. There are many reasons for that. Family, individual, and school factors all contribute to bullying problems. Family factors: A lack of attention and warmth toward the child, together with aggressive behaviour at home, and poor supervision of the child. Individual factors: Children who are active and impulsive in temperament may be more inclined to develop into bullies. ...read more.

They may try to avoid school, and to avoid social interaction, in an effort to escape the bullying. Victims of bullying can suffer from long-term emotional and behavioural problems. Bullies tend to become aggressive adults who stand a much higher chance than average of obtaining multiple criminal convictions (Olweus, 1979). Bullying in school sometimes consists of a group of students taking advantage of, or isolating one student in particular and gaining the loyalty of bystanders who want to avoid becoming the next victim. Teachers and the school system itself can also perpetrate bullying. Some cases of school bullying are mentioned hereafter: * In November 2000, Dawn-Marie Wesley, 14, of Mission, British Columbia, Canada, hanged herself shortly after three teenage girls called her. ...read more.

* Another example is Hudson school bullying case, which is as follows: In March 2005, unknown students broke into a boy's (referred to only by the initials DP) gym locker, removed his clothes and urinated on them, and threw his tennis shoes in the toilet. The locker was also "covered with shaving cream spelling out sexually oriented words." Later that spring, two students ... hung a "Mr. Clean" poster on DP's locker in the main hallway. In one incident cited by the court, a teacher joined in on the abuse. School violence cases - including the Columbine school shooting tragedy - highlight the serious and sometime deadly consequences of bullying behaviour. There are thousands of school bullies, and even if they are not as serious as the Columbine school bullying case, they consist a serious threat, that nobody should ignore. 1 ...read more.