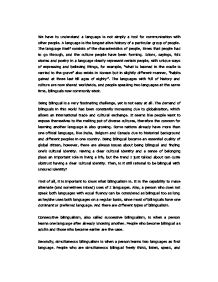 We have to understand a language is not simply a tool for communication with other people. A language is the longest alive history of a particular group of people. The language itself consists of the characteristics of people, times that people had to go through, and the culture people have been forming. Idiom, sayings, folk stories and poetry in a language clearly represent certain people, with unique ways of expressing and believing things, for example, "what is learned in the cradle is carried to the grave" also exists in Korean but in slightly different manner, "habits gained at three last till ages of eighty". The languages with full of history and culture are now shared worldwide, and people speaking two languages at the same time, bilinguals now commonly eixst. Being bilingual is a very fascinating challenge, yet is not easy at all. The demand of bilinguals in this world has been constantly increasing due to globalisation, which allows an international trade and cultural exchange. ...read more.

The survey carried in U.S.A. showed that 2 of Koreans who were born in U.S.A. in 10 don't have Korean identity at all, considering themselves totally American while their parents are totally Korean. And 3-4 of those in 10's ability to use Korean language was at a primary school student's level. It shows that then these people will create their own mixture of Korean and American culture, which may not be accepted by majority of people. Also, when there is no cleary identity or full understanding in another langyage, the mixture of two languages occur. Deformation of one language occurs in many countries, but famous examples are Hinglish (Hindi+English) and Japlish (Japanese+English). A language is changed into a convenient form for a group of people and this puts languages in disorder, making them lose its uniqueness and purity. Furthermore, not clear identity may bring a communicating problem with monolingual people. Many of old Asian people feel that English is a rude language, because the language doesn't really have special words for calling elder people, like elder brother. ...read more.