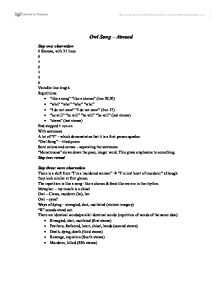 Owl Song - Atwood Step one: observation 6 Stanzas, with 31 lines 6 4 6 4 5 6 Variable line length Repetitions: * "like a song" "like a chorus" (line 29,30) * "who" "who" "who" "who" * "I do not want" "I do not want" (line 17) * "he will" "he will" "he will" "he will" (last stanza) * "claws" (last stanza) End stopped + run on With sentences A lot of "I" - which demonstrates that it is a first person speaker "Owl Song" - titled poem Semi colons and comas - separating the sentences "Monotonous" slows down the pace, longer word. This gives emphasize to something. Step two: reread Step three: more observation There is a shift from "I'm a murdered woman" --> "I'm lost heart of murderer" although they look similar at first glance. The repetition is like a song- like a chorus & feels like we are in the rhythm. Metaphor - my mouth is a chisel Owl - Claws, murderer (he), her Owl - eyes? Ways of dying - strangled, shot, mutilated (violent imagery) ...read more.

There is more to that, which will be explained later in this analysis. The purpose of this poem is to seek understanding or the "why" of death, especially murder, and to show there is murderous tendencies in all of us. In this poem, Atwood attempts to seek the why of death and to show there are murderous tendencies in all of us. Atwood has achieved her purpose successfully, through the use of owl imagery/motif, shifting first person speaker, and tone in the poem. The owl imagery/motif runs throughout the poem. Owl, which acts as a symbol, is defined as "wise" and "night time predators." This gives further emphasis on the idea of death in this poem. In the first stanza, the first words of lines 2-5 are "who," which could be seen and/or interpreted as onomatopia. The word "who," if verbally pronounced, is how owl often "sings." The most important point to point out regarding the owl is that the owl transforms the soul of the victim into an owl-like spirit since the narrator "grew feathers" and escaped (as if she was flying- like owls), as portrayed in the second stanza of the poem. ...read more.

The shift of the first person speaker gives understanding of the purpose. The first person speaker does not want revenge or expiation, but instead, she wants to understand the "why" of death. The only way for the first person narrator to do so is by transforming into a murderer as one who commits the murder will understand the "why." Furthermore, the poem in this poem is quite important. For instance, if the purpose of the poem is to seek for understanding, and as explained above, and the understanding does not arrive, then it's hopeless. Therefore, the tone of this poem is bleak and/or ironic. To find why of the death won't be achieved unless one commits the act. However, it is ironic because the speaker shifts into a future murderer but yet she does not want to seek for revenge but just an answer. However, once again, only one who commits the act will know the why. Since the first narration does not commit the act, she will never find the why of death; therefore, it's hopeless. There are no answers. No matter how hard you have tried to find the answer, death is death. In addition, if the speaker has ever found the why, it's pointless anyway because the speaker is dead. ...read more.