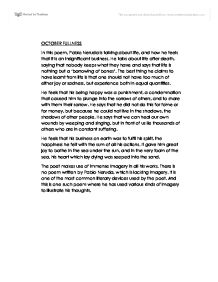 OCTOBER FULLNESS In this poem, Pablo Neruda is talking about life, and how he feels that it is an insignificant business. He talks about life after death, saying that nobody keeps what they have and says that life is nothing but a 'borrowing of bones'. ...read more.

He says that he did not do this for fame or for money, but because he could not live in the shadows, the shadows of other people. He says that we can heal our own wounds by weeping and singing, but in front of us lie thousands of others who are in constant suffering. ...read more.

The poet makes use of immense imagery in all his works. There is no poem written by Pablo Neruda, which is lacking imagery. It is one of the most common literary devices used by the poet. And this is one such poem where he has used various kinds of imagery to illustrate his thoughts. ...read more.