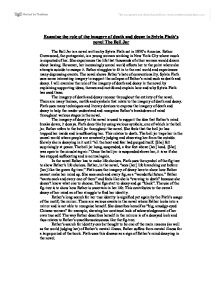 Esther, in the novel, "sees [her] life branching out before [her] like the green fig-tree." Plath uses the imagery of decay here to show how Esther cannot make her mind up. She sees each and every fig, as a "wonderful future." Esther "wants each and every one of them" and feels like she is "starving to death" because she doesn't know what one to choose. The figs start to decay and go "black". The use of the fig-tree is to show how Esther is uncertain in her life. This contributes to the overall decay of her mind as of her struggle to find her identity. Esther's long search for her true identity is signified yet again by the Plath's usage of the motif; the mirror. There are various events in the novel where Esther looks into a mirror and is not able to recognise herself. She describes herself as "big, smudgy-eyed Chinese woman" for example, showing her continual lack of acknowledgement of her own true self. The way Esther describes herself in the mirrors is of a decayed look and thus relates to Esther's unselfconsciousness like the fig-tree. ...read more.

An example of a transformation Esther undergoes is when she loses her virginity to Irwin. Plath uses the motif of blood to allow Esther to feel experienced. "[Esther] couldn't possibly be a virgin any more. [She] smiled into the dark. [She] felt part of a great tradition." Plath uses this because she wants to show a transformation in Esther's recovery. Plath uses the imagery of death once again to show how Esther "was only purely happy until [she] was nine years old." this was when her father died. The usage of death here indicates to us that Esther has not been happy for ten years. The imagery of death can be linked to unhappiness because when someone dies there is a lot of unhappiness involved. The imagery of death and decay are used by Sylvia Plath throughout the entire novel. She uses literary devices such as motifs, symbols and themes to relate to these images. She does this for many reasons, some of which are; to emphasise the breakdown, and recovery, of Esther's mental health and to show when Esther was ever truly happy. I think Plath uses the reoccurring images of decay and death well in the novel to achieve certain transformations in Esther's life. Andrew Benton. ...read more.