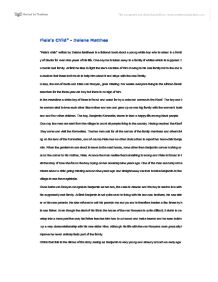 &quot;Fiela's child&quot; written by Dalene Matthees is a fictional book about a young white boy who is raised in a family of blacks for over nine years of his life. One day he is taken away to a family of whites which is supposed to be his real family. At first he

Fiela's Child" - Dalene Matthee "Fiela's child" written by Dalene Matthees is a fictional book about a young white boy who is raised in a family of blacks for over nine years of his life. One day he is taken away to a family of whites which is supposed to be his real family. At first he tries to fight the law's decision of him moving to his real family but in the end he decides that there isn't much to help him about it and stays with the new family. Lukas, the son of Barta and Elias van Rooyen, goes missing. For weeks everyone living in the African forest searches for the three-year-old boy but there is no sign of him. In the meantime a white boy of three is found and cared for by a coloured woman in the Kloof. The boy and the woman start to love each other like mother and son and grow up as one big family with the woman's husband and four other children. The boy, Benjamin Komoetie, learns to lead a happy life among black people. One day two men are sent from the village to count all people living in the country. Having reached the Kloof they come and visit the Komoeties. The two men ask for all the names of the family members and others living on the land of the Komoeties, and of course Fiela has no other choice than to report her hand-child Benjamin. ...read more.

He leaves the van Rooyens and sets off to find Nina. Benjamin Komoetie, also known as Lukas van Rooyen is, at the age of 20, a white very tall man with deep blue eyes. He is probably well built and quite muscular seeing as he had to chop wood for his families income at a very young age. He is a very gentle nice boy loved by all people he comes across in his life. Benjamin is taught how to read and write at a very young age and once having moved from one family to the other he is able to pass on his intelligence by reading to his aunt Gertie. I think that Benjamin Komoetie's dominant trait is his mental strength especially when he is taken away from his family and is forced to adapt to a new surrounding and background. Even at such an early age and with nobody there to help him through his sudden change of life, he still manages to see through it in a positive way. This is shown, in how after a while of trying to fight against the government's decision of him being sent to the van Rooyens, he decides to accept the fact that he will be spending most of his life without his old family and moves on. Most children at his age would have kept on trying to get back to their old families and would only have managed to adapt to their new family surrounding after years where as the boy managed it after a few months. ...read more.

It filled him with guilt and shame. She was his sister...." I feel this quote is also very important in the novel but in terms of the plot development. It is the first time Benjamin is hinting towards questioning his identity. He realises that he has awkward feelings towards his sister, and it was a sister he had such a great friendship with. He feels like there is something wrong with those feeling and that they are wrong. They later on lead to Benjamin wondering why he has such feelings towards his sister and what this means. I think that Fiela's child is a very profound novel because Dalene Matthee manages to show the reader how strong a child can be even at a very young age. I straight away got carried into the novel and I felt like the child is a hero for being able to manage things not even an adult would be able to manage - suddenly switching from one type of life and family to another. I also really like the way Dalene Matthee put the imagery into the story. One could picture the forest in such clear detail and it felt as though I was with Benjamin or sometimes even as if I was Benjamin. While reading I could also straight away feel as if I were in the hot dusty Kloof or in the moist Forest because of the use of descriptive words, and of the African native words used for the nature. I think this book is a very good read and I really enjoyed it and feeling part of it. ...read more.