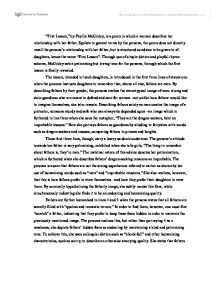 "First Lesson," by Phyllis McGinley, is a poem in which a woman describes her relationship with her father. Spoken in general terms by the persona, the poem does not directly recall the persona's relationship with her father, but is structured as advice to be given to all daughters, hence the name "First Lesson". Through use of simple diction and playful rhyme scheme, McGinley sets a patronizing but loving tone for the persona, through which the first lesson is finally revealed. The lesson, intended to teach daughters, is introduced in the first three lines of stanza one when the persona instructs daughters to remember that, above all else, fathers are men. By describing fathers by their gender, the persona evokes the stereotypical image of men: strong and stoic guardians who are meant to defend and care for women -not unlike how fathers would like to imagine themselves, she later reveals. Describing fathers solely as men creates the image of a protector, someone sturdy and safe who can always be depended upon -an image which is furthered in line three when she uses the metaphor, "They are the dragon-seekers, bent on improbable rescues." ...read more.

She does not regard fathers' actions with anger, but instead finds it endearing that they care enough to worry, exposing the persona's unconditional love for her father. The atmosphere of unconditional love is relayed through the vulnerable and childlike depiction of fathers developed in the first lines and continued in lines 6 to 8. By maintaining a patronizing tone, the persona gives a more human portrayal of fathers. She describes them as beings "believing change is a threat," and through this statement gives fathers a more sensitive aspect than the stoic superhero first described. The persona reverses the stereotypical gender role when she describes fathers as such because it depicts a fear and dependence not commonly associated with men. Going on to give examples of change, such as high heels and bicycles, creates an even more human image of fathers, as safe and unassuming items such as a pair of shoes can strike fear enough within them to hinder their reception by "months." Though this can be frustrating, the persona indicates by hyperbolizing how long it takes to receive such items, it also depicts her endearment for her father as the hyperbole reveals the triviality of such matters. ...read more.

Though it is clear that that his incessant worrying was annoying at times, she understands why he did so and still loves him in spite of it. With colloquial language and simple diction, this idea of unconditional love is amplified as she speaks of his actions like a mother does of her child's. In the same way, the rhyme scheme of abcb, defe, ghih, and jklk also functions to expose the persona's unconditional love. She is not angry with him for his over protectiveness but instead finds it endearing, as the happy and childlike rhyming implies. "First Lesson" explores the relationship between fathers and their daughters, but also attempts to explain a little about fathers themselves. Though they may seem infallible on the surface, they are no different than everyone else, with fears and insecurities just the same. These fears can sometimes manifest themselves in over protectiveness, but they mean no harm. Fathers are just hapless beings trying to cope with the hardships of life as best they know how. And it is here we find the first lesson McGinley is giving to young girls: though their over protectiveness is bothersome at times, it is really because fathers love you that they act in such a way. O'Brien> 3 ...read more.