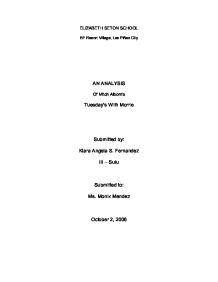 five people you meet in heaven

ELIZABETH SETON SCHOOL BF Resort Village, Las Pi�as City AN ANALYSIS Of Mitch Albom's Tuesday's With Morrie Submitted by: Klara Angela S. Fernandez III - Sulu Submitted to: Ms. Monik Mendez October 2, 2006 Biography Mitch Albom wears many hats, including nationally syndicated writer of two columns he pens for the Detroit Free Press, best-selling author and radio and television personality. His syndicated lifestyle column TUESDAYS WITH MITCH calls our current culture into question and comes down hard on tough issues like racism, bad parenting and guns in our nation's schools. His syndicated sports column delivers the human side of sports greats and not-so-greats, giving memorable accounts of their trials and tribulations. Albom's best-selling book, Tuesdays with Morrie, has become one of the most popular books in recent years with 2 million copies in print worldwide. Tuesdays spent 70 weeks on The New York Times' best-seller list, was selected for Oprah Winfrey's on-air book club and was made into an Emmy-winning TV Movie. Albom's other books include BO and Fab Five, which is being made into a television movie by the Fox Television Network, and a series of compilations of his Detroit Free Press columns: Live Albom I-IV. ...read more.

He raised Morrie and Morrie's younger brother David 2.2.3 Janine - She is Mitch's wife and a professional singer. She is shy about her talent and a perfectionist about conditions. 2.2.4 Peter - Mitch's younger brother who tries to find a treatment on his pancreatic cancer. 2.2.5 Charlotte - She is Morrie's wife and a professor at M.I.T. She take care Morrie from the ALS 2.2.6 Rob and Jon - They are Morrie's beloved two adult sons. 2.2.7Eva - An Immigrant woman who Charlie marries after Morrie's mother dies. She stands as a loving stepmother for Morrie and David. 2.2.8 Norman - An old friend of Morrie's who sculpted a bust of Morrie. 2.2.9 Ted Koppel - A famous interviewer from the show "Nightline". He had a conference with Morrie Schwartz for three interviews. 2.2.10 David - Morrie's younger brother who born after his mother's death. He suffered from Polio after playing in the rain with Morrie. 3. Point of View 3.1 Third Person Omniscient Mitch Albom, The Author of "Tuesday's with Morrie", knows and sees what happened on the novel. He narrates the life of Morrie during his college years, And by time Morrie suffered from ALS. ...read more.

I asked myself I asked myself "am I Going to withdraw from the world, like most people do, or am I going to live?' I decided I'm going to leave or at least try to live the way I want, with dignity, with courage, with humor, with composure" 7.3 Flashback "By the start of my senior year,.... Morrie suggests I try an honor thesis" "It is the late spring of 1979... When the ceremony was over, we threw our caps in the air and we are officially graduated from college...." "It is a winter in my childhood, on a snow-packed hill on our suburban neighborhood." "It is my freshman year, Morrie is older than most of the teachers......." "It is our first class together, in the spring of 1976." 7.4 Foreshadowing "The last class of my old professor's life took place once a week in his house, by a window in the study where he could watch a small hibiscus plant shed its pink leaves. The class met on Tuesdays." 8. Style Mitch Albom's ways of using words were simple yet inspiring. The story is fully detailed from the flashback to foreshadow. The content of the novel is significant. The styles of Mitch Albom were quite unique because it is like a biography but a motivating story. 9. ...read more.