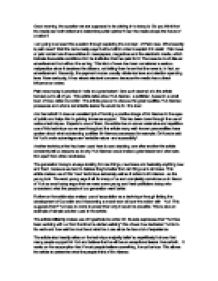 FOA on media. This article talks about Yuri Alemao a politician, based in a small town of Goa called Cuncolim. The article goes on to discuss the great qualities Yuri Alemao possesses and what a remarkable leader he would be for the town.

Good morning, the question we are supposed to be delving in to today is: Do you think that the media can both reflect and determine public opinion? Can the media shape the future of a nation? I am going to answer this question through exploring the concept of Paid news. What exactly is paid news? Well the name really says it all but still in order to explain it in detail Paid news or paid content are those articles in newspapers, magazines and the electronic media, which indicate favourable conditions for the institution that has paid for it. The news is much like an advertisement but without the ad tag. This kind of news has been considered a serious malpractice since it deceives the citizens, not letting them know that the news is, in fact, an advertisement. Secondly, the payment modes usually violate tax laws and election spending laws. More seriously, it has raised electoral concerns because the media has a direct influence on voters. Paid news today is practise in India to a great extent. ...read more.

This article makes use of this "new" technique extremely well as it refers to Mr Alemao as the young turk. The word young says it all for many of us and completely convinces us in favour of Yuri as most today argue that we need some young and fresh politicians today who understand what the people of our generation want better. Further on the article also makes use of association as a technique through linking the development of Cuncolim and it becoming a model town all over the nation with Yuri. This suggests that if Yuri was to come to power then only it would be possible. This is also an example of simple solution used in the article. The article brilliantly makes use of hyperbole too when Dr. Kurade expresses that "Yuri has been working with us from the time he started walking" this shows how dedicated Yuri is to his work and how well he must be at what he does since he has a lot of experience. The article also heavily relies on the technique majority belief as repetitively it shows that many people support Mr Yuri and believe that he will be an exceptional leader. ...read more.

All in this entire article magnificently convinces people to support Mr Yuri as it portrays him as the perfect candidate. It also tries to determine public opinion in favour of Mr Yuri through reflecting public opinion to a great extent. Also if people do get convinced to back Mr Yuri through this article it is quite possible that this article then has managed to shape the future of the town Cuncolim if not the country. Now I will discuss the ethicality of paid news. From my perspective the basic purpose of any kind of news should be to present the citizens with basic information of what really is happening around them through reliable facts, data and sources without being biased. However paid news defies all of this as it is usually biased towards someone or a group of people as already proven by the piece I just discussed. Also paid news to an extent corrupts our whole system of democracy as through payments people not only highlight the positives but also are able to cover up the negativity of a possible candidate. This does not allow the citizens access to complete truth which means they form their opinion only on half information. ...read more.