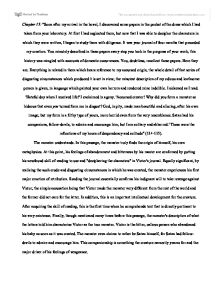 Chapter 15: "Soon after my arrival in the hovel, I discovered some papers in the pocket of the dress which I had taken from your laboratory. At first I had neglected them; but now that I was able to decipher the characters in which they were written, I began to study them with diligence. It was your journal of four months that preceded my creation. You minutely described in these papers every step you took in the progress of your work; this history was mingled with accounts of domestic occurrences. You, doubtless, recollect these papers. Here they are. Everything is related in them which bears reference to my accursed origin; the whole detail of that series of disgusting circumstances which produced it is set ...read more.

The monster understands. In this passage, the monster truly finds the origin of himself, his own metaphysics. At this point, his feelings of abandonment and bitterness by his master are confirmed by putting his newfound skill of reading to use and "deciphering the characters" in Victor's journal. Equally significant, by realising the such crude and disgusting circumstances in which he was created, the monster experiences his first major emotion of retribution. Reading the journal essentially confirms his indignant will to take revenge against Victor, the simple accusation being that Victor made the monster very different from the rest of the world and the former did not care for the latter. ...read more.

I chose to use pencil and not add to the grey lead-colour in order to help convey the gloominess yet simplicity of the matter. The content the monster reads from the journal has a strong macabre and mean-spirited frame of mind, illustrated by the grey hue, while the insight the monster gains is very straightforward: Victor did not bother to help his creation in any way whatsoever, leaving it to face the world by itself and struggle without any guidance from a mother-figure. The angle, design, and shape are again, like the effect of the artwork, for purely representational purposes. I discovered a front-view that showed the book as well is the most practical method of drawing the scene. Lastly, the title, "The Monster Understands", expresses the significance of the passage in a very curtail yet descriptive manner. ?? ?? ?? ?? ...read more.