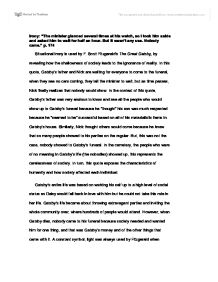 Irony: "The minister glanced several times at his watch, so I took him aside and asked him to wait for half an hour. But it wasn't any use. Nobody came." p. 174 Situational irony is used by F. Scott Fitzgerald's The Great Gatsby, by revealing how the shallowness of society leads to the ignorance of reality. In this quote, Gatsby's father and Nick are waiting for everyone to come to the funeral, when they see no cars coming, they tell the minister to wait, but as time passes, Nick finally realizes that nobody would show. In the context of this quote, Gatsby's father was very anxious to know and see all the people who would show up to Gatsby's funeral because he "thought" his son was much respected because he "seemed to be" successful based on all of his materialistic items in Gatsby's house. Similarly, Nick thought others would come because he knew that so many people showed to his parties on the regular. But, this was not the case, nobody showed to Gatsby's funeral. In the cemetery, the people who were of no meaning in Gatsby's life (the nobodies) showed up, this represents the carelessness of society. ...read more.

But, she failed to realize that she had nothing she needed, she did not have any real happiness or love. 2. Introduction: In the novel The Great Gatsby, F. Scott Fitzgerald wrote the passage "The valley of ashes" in the present tense which differs from the rest of the book because the novel is mostly written in the past tense. This passage illustrates important motifs which reveal the overall greater theme within the whole novel. Because this passage is different, one can see that this passage is significant and includes many important aspects which the author brings out in a very unique way. Thesis: In the passage, Fitzgerald repeats important motifs to illustrate society's ignorance of reality which reveals the "eternal blindness" of the truth because of the need of, essentially, unimportant materials in life. 1. Fitzgerald uses the repetition of words that represent impaired vision due to obscurity to represent the symbolic meaning of "blindness" of society to reality. "hastily" "ashes" "rising smoke" "dimly" "powdery air" "ghastly creak" "impenetrable cloud" "bleak dust" "dimmed" "dismal scene" 2. Fitzgerald uses the repetition of the motif "eyes" as a metaphor to convey the indefinable significance of Doctor T. ...read more.

Therefore, Gatsby had to die. Gatsby was the one character who wanted more than what he already had, he was looking for more than the American Dream, and nobody could get that for him, he could not use any of his materials to buy this dream. He himself had to try his best; he had to use all of his materials to bring his dream to him. But, though he did do all of these things to try and persuade Daisy to come back to his life, she did not do it, and we as readers know that she never would have. And because Gatsby dies, the Dream is also over for him and the opinion of the author is finally being clearly explained. Reaching the American Dream is impossible. The irony within this idea of the destruction of the American Dream in the novel demonstrates the contradictions of human behavior. Through the deaths of the three characters with goals, one can realize that the American Dream is impossible but society looks beyond the truths of this idea, and continues to dream big and reach higher goals. What society does not understand is that by pursuing this dream, one will essentially destroy their whole life. ?? ?? ?? ?? ...read more.