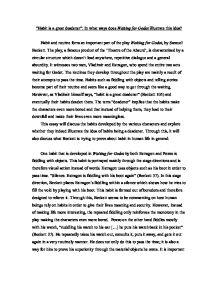 &quot;Habit is a great deadener&quot;. In what ways does Waiting for Godot illustrate this idea?

"Habit is a great deadener". In what ways does Waiting for Godot illustrate this idea? Habit and routine form an important part of the play Waiting for Godot, by Samuel Beckett. The play, a famous product of the 'Theatre of the Absurd', is characterized by a circular structure which doesn't lead anywhere, repetitive dialogue and a general absurdity. It witnesses two men, Vladimir and Estragon, who spend the entire two acts waiting for Godot. The routines they develop throughout the play are mainly a result of their attempts to pass the time. Habits such as fiddling with objects and telling stories become part of their routine and seem like a good way to get through the waiting. However, as Vladimir himself says, "habit is a great deadener" (Beckett 105) and eventually their habits deaden them. The term "deadener" implies that the habits make the characters even more bored and that instead of helping them, they lead to their downfall and make their lives even more meaningless. This essay will discuss the habits developed by the various characters and explore whether they indeed illustrate the idea of habits being a deadener. Through this, it will also discuss what Beckett is trying to prove about habit in human life in general. ...read more.

The varied syntax of this particular speech, ranging from complicated poetic sentences to short crude phrases, makes it interesting to his audience and shows how he is indeed acting. Every time he takes on a role, he ensures that everyone is paying attention to him because that is his ultimate goal. Routines are a way for people to define themselves by what they habitually do. But again, this habit turns out to be a deadener which is illustrated by Pozzo's sudden change of status in the second act. Suddenly he is blind and no one pays attention to him anymore. He repeatedly asks for help but no one responds and this proves how his habits deadened him. A similar habit to that of performing is telling stories. It is one of the first habits to be introduced in the play and is again a way for them to fill the time. In the beginning of the play, Vladimir attempts to tell his first story, but Estragon repeatedly interrupts him: "two thieves, crucified at the same time as Our Saviour. One - / our what?" (Beckett 6). This habit is almost an immediate deadener as it fails to achieve its goal of passing time and giving them something to do. ...read more.

The above quotation invokes pathos in the audience as they realise how strong their reliance is upon one another and therefore how low they have sunk as individuals. They are trying to avoid insecurity through their habits, but Beckett is implying that this is impossible and that habits will lead to monotony and insignificance in your life. Instead of profiting from each other, staying together prevents them from moving forward and thereby deadens them. Habit is indeed a deadener and Waiting for Godot illustrates this in numerous ways. All four characters in the play have been deadened by their habits and instead of their routine saving them, they caused their downfall. It seems as if Beckett is trying to illustrate how habit affects people in reality. It is unavoidable as human beings to develop habits. It is almost like a natural mechanism in order for us to avoid absurdity in life. However, Beckett implies, one has to accept absurdity as it is part of life. Habits won't give us the security we need, they will only bring monotony and eventual deadening to our lives as happened in Waiting for Godot. This play is obviously part of absurdist theatre and therefore an exaggeration, however Beckett seems to be relating it to real life to a certain extent. He seems to be advising to prevent from developing habits and instead accept the randomness that unavoidably accompanies life. ...read more.