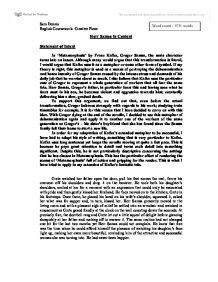 Herr Samsa Is Content Statement of Intent In 'Metamorphosis' by Franz Kafka, Gregor Samsa, the main character turns into an insect. Although many would argue that this transformation is literal, I would argue that Kafka uses it as a metaphor or some other form of symbol. If my theory is right, this metaphor is used as a means of portraying the dehumanisation and hence insanity of Gregor Samsa caused by the intense stress and demands of his daily job that he worries about so much. I also believe that Kafka uses the particular case of Gregor to represent a whole generation of workers that all fear the same fate. Herr Samsa, Gregor's father, in particular fears this and having seen what he fears most in his son, he becomes violent and aggressive towards him; eventually delivering him a slow, gradual death. To support this argument, we find out that, even before the actual transformation, Gregor behaves strangely with regards to his work; studying train timetables for example. It is for this reason that I have decided to carry on with this idea. With Gregor dying at the end of the novella, I decided to use this metaphor of dehumanisation again and apply it to another ...read more.

Grete looked up at him adoringly and smiled before turning to her father with a face that begged no more talk of work matters. Accepting this, Herr Samsa looked at them both. "Very well. Off you go." "Thank you, sir" replied Franz and he eagerly scuttled behind the beautiful young woman who led him to the parlour. Herr Samsa got up and poured himself a small glass of schnapps and settled back down into the warmth of his armchair. As he let his eyes close, he reflected upon how much better life was now. Even going back to work didn't bother him in the least. He felt healthier and fitter than he had been in a long time and he was now always able to join in with the family walks on Sundays. Franz also came with them. The four of them would walk with their arms linked, talking and laughing with a spring in their step. Thus half an hour passed very happily for Herr Samsa before he was called to join the rest of his family at the dinner table. Grete was rather sullen right throughout the meal. ...read more.

Both wore anxious looks upon their faces and as more shouts of terror approached their house, Frau Samsa joined them from the kitchen, wiping the backs of her hands in her apron as she walked. "Where's Franz?" she asked immediately. A look of horror crossed Grete's face as it occurred to her that the angry manifestation outside and Franz's lateness could be linked. She tried desperately to see what was going on through the living room window but the angle wasn't wide enough. A couple of flying stones and an apple came into her field of vision and with that she rushed to the front door with both her parents close behind her. It was as she grabbed the cold brass handle to pull the door open that she realised what this was. She remembered the conversation last night at the table and, sure enough, as she hastily poked her head through the door and looked down the street, she clasped her heart. Franz was there sure enough, scuttling desperately down the street, followed by an angry mob yelling at him in disgust and flinging stones of hatred at him. Before her parents were able to see anything, she ran back in, bolted the door and sunk to the floor. ...read more.