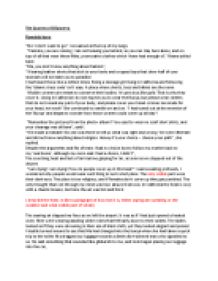 I had heard those line a million times. Being a teenage girl living in California and following the Islamic dress code isnt easy.

﻿The journey of Discovery Ruwaida bana ?No! I don?t want to go!? I screamed at the top of my lungs. ?Yasmine, you are coming. I am not leaving you behind, so you can stay here alone, and on top of all that wear these filthy, provocative clothes which I have had enough of,? Mama yelled back. ?Ma, you don?t know anything about fashion?, ?Wearing leather shorts that stick to your body and cropped tops that show half of your stomach will not take you to paradise. I had heard those line a million times. Being a teenage girl living in California and following the ?Islamic dress code? isn?t easy. A place where shorts, tees and bikinis are the norm. ?Muslim women are meant to conserve their bodies. It?s precious like gold. That is why they cover it. Living in California I do not expect you to wear the Burqa, but please wear clothes that do not reveal any part of your body, and please cover your head- scarves are made for your head, not neck!? She continued to ramble on and on. ?I had tuned out at the mention of the ?Burqa? and began to wonder how those women could cover up all day?! ...read more.

Ma dragged our luggage towards a little olive-skinned man who signalled to us. He said something that sounded like gibberish to me, and took began placing our luggage into the car, It was at that point that I realised everyone was watching me. A tall woman with the most extravagant eye makeup approached me and told me I had to cover up. I almost laughed at her in bewilderment. Did they actually think I would wear a burqa? I smiled, nodded and got into the car. The strong cherry scent of the car lingered around me as I stepped out of the cool air-conditioned car and made my way towards the grandest house I had ever seen. Four similar looking females stood eagerly by the front door. From Ma?s shrieks and shrills and striking resemblance I guessed they were my aunts. They stood in array of multicolored dresses that flashed beneath their loose fitted burqa?s. The burqas they wore were modern and stylish with encrusted jewels that made it look as if they had been dipped into a sea of glitter. As soon as my head touched the pillow I fell into the deepest slumber and woke up to someone gradually touching my arm. ...read more.

I had no show to put on or need to prove anything to anyone. I was so different from Sara and her sister but they still accepted me for who I was. They didn?t judge what I was wearing or who I was wearing like they did back ?home?. (when the girl was coming down the stairs they looked at her and made her look naked, which means they didn?t accept her and suddenly they accepted me--- its contrast so show how they changed there mind) Day by day I understood the meaning of family, respect and love. Spending time with my new found family I understand why we Muslim females cover our bodies. Ma was right, our bodies are not a commodity or something of a low degree, but rather like a temple of gold we should conserve. My father left ma and I when I was only two years of age, I had no brothers and no one to teach me right from wrong. Instead I depended on my friends who I learnt were humans making mistakes themselves and taking me down with them. Their superficial emphasis on keeping up with trends gave them no space to guard their bodies and morals. (Give more example on why u changed so much- instead of saying day by day, show it) ...read more.