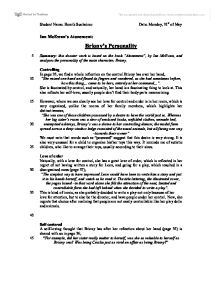 Ian McEwan's Atonement: Briony's Personality Summary: this dossier work is based on the book "Atonement", by Ian McEwan, and analyses the personality of the main character, Briony. Controlling In page 35, we find a whole reflection on the control Briony has over her hand; "She raised one hand and flexed its fingers and wondered, as she had sometimes before, how this thing... came to be hers, entirely at her command...". She is fascinated by control, and naturally, her hand is a fascinating thing to look at. This also reflects her self-love; usually people don't find their body parts mesmerizing. However, where we can clearly see her love for control and order is in her room, which is very organized, unlike the rooms of her family members, which highlights her distinctiveness; "She was one of those children possessed by a desire to have the world just so. Whereas her big sister's room was a stew of unclosed books, unfolded clothes, unmade bed, unemptied ashtrays, Briony's was a shrine to her controlling demon; the model farm spread across ...read more.

Was being Cecilia just as vivid an affair as being Briony?" It is amazing how the author shares her thoughts with us like this, as it gives us a true insight to her personality. This thought reflects self-centeredness, as it suggests she doesn't know if the experience of life of others is similar to hers, also suggesting a lack of empathy, as does this quote; "The rehearsals also offended her sense of order. The self-contained world she had drawn with clear and perfect lines had been defaced with the scribble of other minds, other needs" This quote suggests that Briony thinks she is better than others; her lines are "perfect", whereas others merely "scribble". On the other hand, her order is disturbed by the needs of others too! In this way, she is capable of not considering the needs of others, and thus probably their emotions too, and controlling them, making them follow her will. Thus, in her mind order and control are clearly linked; because what she does is "perfect", things can only remain in order if controlled by her! ...read more.

Because the people she controls, through rehearsals, are the twins and Lola, who in a sense feel that it is their duty to participate in the play, she is fairly successful, up to the point where the play fails. The play results in a failure not because of chance, but because of her personality; Jackson, Pierrot and Lola are not interested in the play, but have to succumb to her will, to her controlling personality. However, in the end it is cancelled, as she can't live with the twins delaying and ruining the rehearsals, or with Lola wanting to be Arabella. These events show that when the perfect order of Briony's world is broken, and when she doesn't feel in control, things do not go well. Thus, I predict that Briony is not dysfunctional as long as things are under her control. In the future, when she exits the fantasy world in which she lives in, and has to deal with people who are not going to be under her control and follow her will, I would predict she will have problems. Student Name: Date: Email: Student Name: Henrik Suoheimo Date: Monday, 31st of May ...read more.