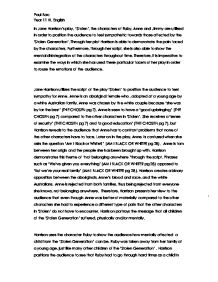 In Jane Harrisons play, Stolen, the characters of Ruby, Anne and Jimmy are utilised in order to position the audience to feel sympathetic towards those affected by the Stolen Generation. Discuss.

In Jane Harrison's play, 'Stolen', the characters of Ruby, Anne and Jimmy are utilised in order to position the audience to feel sympathetic towards those affected by the 'Stolen Generation'. Through her plot Harrison is able to demonstrate the pain faced by the characters. Furthermore, through her script, she is also able to show the mental disintegration of the characters throughout time. Therefore, it is imperative to examine the ways in which she has used these particular facets of her play in order to rouse the emotions of the audience. Jane Harrison utilizes the script of the play 'Stolen' to position the audience to feel sympathy for Anne. Anne is an aboriginal female who, adopted at a young age by a white Australian family. Anne was chosen by the white couple because 'she was by far the best' (THE CHOSEN pg 7). Anne is seen to have a 'good upbringing' (THE CHOSEN pg 7) compared to the other characters in 'Stolen'. She receives a 'sense of security' (THE CHOSEN pg 7) and 'a good education' (THE CHOSEN pg 7), but Harrison reveals to the audience that Anne has to confront problems that none of the other characters have to face. ...read more.

Harrison shows the audience in 'RUBY COMFORTING HER BABY' (pg. 9), that Ruby was an ordinary girl who played 'with her doll' (RUBY COMFORTING HER BABY, pg. 9). This same scene also shows the audience the horrible memories that Ruby have in her young mind, as Ruby is nurturing her doll, she seems like she is pretending to be her own mother and the doll being her. Ruby tells her doll 'I love you Ruby' (RUBY COMFORTING HER BABY pg.9). When Ruby grows up and leaves the orphanage, she goes and works for a white family. One day, her family come to visit, but it is revealed to the audience that Ruby is mentally disabled and is not well. Ruby's family want to take her home but Ruby replies "Don't live in no home any more. I work for the Hardwick's" (RUBY'S FAMILY COME TO VISIT, pg. 31). It is clearly shown that Ruby cannot see that those people are her family. Harrison displays to the audience that in Ruby's mind, Ruby believes that she has no family, reinforcing the fact that the children of the 'Stolen Generation' suffered immensely. ...read more.

This was extremely traumatic for Jimmy, and he couldn't endure the grief and resorts to ending his own life. Jimmy, Ruby and Anne all faced mentally enduring events at some point in their lives. But only the only happing ending out of these three characters is the one of Anne's. Ruby's end is a more tragic one, as she is permanently scarred from the events that have occurred to her in her life. Jimmy also suffers a tragic end as the he commits suicide. Harrison depicts the harshness and undergone by both of these characters. Ruby and Jimmy's upbringing were very dissimilar in comparison to Anne's, Anne living in a family that cared and provided for her, was contrasted by Harrison, towards Jimmy and Ruby's lifestyle. Both Jimmy and Ruby were brought up in an orphanage with other aboriginal children whose families were also taken away from them. The play 'Stolen', written by Jane Harrison shows the audience the hardship undergone by the characters, Ruby, Jimmy and Anne. Though they are different in many aspects, these characters share the pain of not knowing where to belong and this is shown by Harrison puts forward this idea through her use of the plot and the script. ...read more.