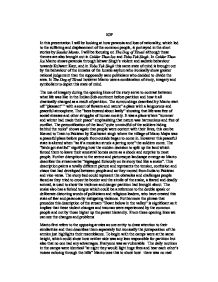 IOP In this presentation I will be looking at how paranoia and loss of rationality, which led to the suffering and displacement of the common people, is portrayed in the short stories by Saadat Manto. I will be focusing on The Dog of Titwal although these themes are also brought out in Colder Than Ice and Toba Tek Singh. In Colder Than Ice Manto shows paranoia through Ishwar Singh's violent and sadistic behaviour towards Kulwant Kaur, and in Toba Tek Singh this same state of mind is brought out by the behaviour of the inmates of the lunatic asylum who ironically show greater rational judgement than the supposedly sane politicians who decided to divide the area. In The Dog of Titwal however Manto uses a combination of irony, imagery and symbolism to depict this state of mind. The use of imagery during the opening lines of the story serve to contrast between what life was like in the Indian Sub-continent before partition and how it all drastically changed as a result of partition. The surroundings described by Manto start off "pleasant" " with a scent of flowers and nature" a place with a languorous and peaceful atmosphere. ...read more.

Both sides try to distinguish themselves from one another "those Sikhs" and "All Pakistanis including dogs should be shot" but essentially they are the same, which can be seen in their interactions with the dog. The Indian camp first names the dog "Jhun Jhun" and the Pakistani camp calls the dog "Shun Shun" showing that it was not religion that made people different but rather their roots. These people were all Punjabis and so they had similar upbringings, which is what makes this situation even more irrational. The Pakistani commander asks Bashir to write in "Gurmukhi, the language of those Sikhs" which just shows that even though it is the language of the Sikhs he knows it because he is from the same place and has grown up with the language. Manto Another point where their Punjabiness is shown is when Bashir a very Muslim name is changed to Bashirey, which sounds much less religious and more Punjabi. This notion of a more cultural or place specific identity can be seen in Toba Tek Singh where the Bishan Singh relates himself not to India and Pakistan but rather to Toba Tek Singh. Manto uses the songs in The Dog of Titwal to great effect. ...read more.

The dog like the common people is trapped in the crossfire and as a result bears the consequences of the authoritarian actions. The dog is even referred to as a "refugee" to show how people were promised homes on the other side but were left stranded. Manto mocks the people for their foolishness and gullibility for complying with this illogical idea and contributing to the terror that partition resulted in. The title of the story has significance especially when one thinks of its connotation in Hindi where the dog is a derogatory term and is used here to show the hierarchy between the common people and authoritarian power. This can again be related to Toba Tek Singh as the dog is from, not India or Pakistan, but from Titwal. Manto uses humour and sheer stupidity to show how ridiculous partition was. The pain and suffering of the common man is really evident is this story as it describes the fratricidal violence and the displacement they endured. Through this story he conveys his rationalistic idea that people are humans before they are Muslims or Hindus and how this was totally disregarded during partition. One could relate this situation, where people are being patronised, to what is happening in places like Iraq and Afghanistan. ...read more.