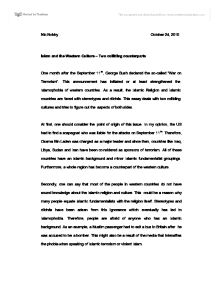 One month after the September 11th, George Bush declared the so-called “War on Terrorism”. This announcement has initiated or at least strengthened the Islamophobia of western countries. As a result, the Islamic Religion and Islamic countries are faced with stereotypes and clichés. This essay deals with two colliding cultures and tries to figure out the aspects of both sides.

At first, one should consider the point of origin of this issue. In my opinion, the US had to find a scapegoat who was liable for the attacks on September 11th. Therefore, Osama Bin Laden was charged as a major leader and since then, countries like Iraq, Libya, Sudan and Iran have been considered as sponsors of terrorism. All of these countries have an Islamic background and minor Islamic fundamentalist groupings. Furthermore, a whole region has become a counterpart of the western culture.

Secondly, one can say that most of the people in western countries do not have sound knowledge about the Islamic religion and culture. This could be a reason why many people equate Islamic fundamentalists with the religion itself. Stereotypes and clichés have been arisen from this ignorance which eventually has led to Islamophobia. Therefore, people are afraid of anyone who has an Islamic background. As an example, a Muslim passenger had to exit a bus in Britain after he was accused to be a bomber. This might also be a result of the media that intensifies the phobia when speaking of Islamic terrorism or violent Islam.

Thirdly, the Islamic religion itself bears a vast issue. Muhammad is considered as the one and only prophet. For this reason, Christianity, Judaism and other religions are regarded as a deformed interpretation of the original monotheistic faith. There are the so-called five pillars of Islam which state the duties and essential practices that Muslims have to follow. For instance, a believer has to pilgrimage to Mecca once in his life. By minorities, the Jihad is seen as the sixth pillar. This means that one has to fight against injustice, oppression and rejecters of truth. Fundamentalists try to fight for Jihad violently and argue with a literal interpretation of the Qur’an. Though, if interpreted logically the Holy Scriptures does not demand this approach.

Finally, one can say that both sides have to learn more about each other. On the hand, Western cultures should not discriminate against all Muslims simply because a majority of them live out their religion in a quiet and peaceful way. Additionally, the media has to point out the differences of Islamic fundamentalists and the Islamic Religion explicitly. When using terms like Islamic terrorism, there is always the risk of generating prejudices. On the other hand, Muslims in foreign countries as well as in their home countries have to accept other religions and must fight fundamentalist groupings. Islamic countries and their educational authorities may improve the teaching and comprehension of the Qur’an. Hopefully, both sides find a way to cope with the difficulties.