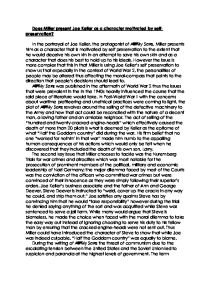 Does Miller present Joe Keller as a character motivated by self-preservation? In the portrayal of Joe Keller, the protagonist of All My Sons, Miller presents him as a character that is motivated by self preservation to the extent that he would deceive his own kin in an attempt to save his own skin and as a character that does his best to hold up to his ideals. However the issue is more complex that this in that Miller is using Joe Keller's self preservation to show us that especially in the context of World War 2, the personalities of people may be altered thus affecting the moral-compass that points to the direction that people's decisions should lead to. All My Sons was published in the aftermath of World War 2 thus the issues that were prevalent in the in the 1940s heavily influenced the course that the said piece of literature would take. In Post-World War II with the concerns about wartime profiteering and unethical practices were coming to light, the plot of All My Sons revolves around the selling of the defective machinery to the Army and how that act could be reconciled with the nature of a decent man, a loving father and an amiable neighbor. ...read more.

The term describing the intense anti-communist suspicion was coined McCarthyism and the plot of All My Sons was set in this context. Arthur Miller brought in the characters of Frank & Lydia Lubey and Jim & Sue Bayliss. Both couples are neighbours of the Kellers and while Frank is there to inject some comic relief when the conflict between George and Joe Keller seems to be too much for the reader, Dr Jim Bayliss plays a more significant role in describing how the neighbourhood views the conviction of Joe and Steve. Jim knows what Keller did but accepts him, not out of cynical indifference to wrong, as his wife Sue does, but out of humanity. Perhaps in the way Miller depicts Jim Bayliss as tolerating and forgiving what Keller did, he hopes that the general public will give up McCarthyism and while not embrace communism, understand that the Soviet Union is trying to create an ideal system for humanity. The pardoning of Joe Keller by his neighbours would also allow the reader to mirror the character's actions and be sympathetic with what Keller did. The themes that present themselves throughout the novel of All My Sons play a significant part in insinuating how Miller wanted to present the character of Keller. ...read more.

We find out at the end of the play that even though Keller had in essence achieved and was living the American Dream, it was not without sacrifices; Larry's suicide and the death of the 21 pilots. Thus we are presented with the flaw of adhering specifically to the economic interpretation of the American Dream. Above all, I feel that Miller wanted to present Joe Keller as a character who is motivated by self-preservation in order to show readers that especially in the Post-World War II context, people should not be so quick to accuse others of crimes that they themselves committed. He introduces Keller and we find that we are able to relate to him, as there are parts of him that we can find in the average "Joe". Nonetheless when the truth is finally revealed we are quick to distance ourselves from this man that only a few paragraphs ago we deemed worthy of our respect. Perhaps by showing Joe Keller as a person who was not able to view the wider picture of our society, Miller hoped that the reader would realize that the next time we accuse someone else, we would have second thoughts about the matter at hand Done by: Justin Ng ?? ?? ?? ?? ...read more.