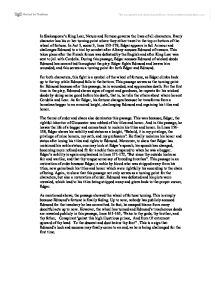 In Shakespeare's King Lear, Nature and Fortune governs the lives of all characters. Every character has his or her turning point where they either travel to the top or bottom of the wheel of fortune. In Act 5, scene 3, lines 153-179, Edgar appears in full Armour and challenges Edmund to a trial by combat after Albany accuses Edmund of treason. This takes place after the French forces was defeated by the English and after King Lear was sent to jail with Cordelia. During this passage, Edgar accuses Edmund of wicked deeds Edmund has committed throughout the play. Edgar fights Edmund and leaves him wounded; and this serves as a turning point for both Edgar and Edmund. ...read more.

And in this passage, he leaves the life of a beggar and comes back to reclaim his titles and honor. In Lines 156-158, Edgar shows his nobility and status as a knight, "Behold, it is my privilege, the privilege of mine honors, my oath, and my profession". He finally reclaims his honor and status after losing his titles and rights to Edmund. Moreover, to show that Edgar has reclaimed his noble status, one may look at Edgar's speech, his speech has changed, becoming more refined and fit for a noble then compared to when he was a beggar. Edgar's nobility is again emphasized in lines 171-172, "But since thy outside looks so fair and warlike, and that thy tongue some say of breeding breathes". ...read more.

However, the wheel has turned and Edmund's treacherous deeds are revealed publicly in this passage, lines 161-165, "False to thy gods, thy brother, and thy father, Conspirant 'gainst this high illustrious prince, And from th' extremest upward of thy head To the descent and dust below thy foot" . This is a sign that Edmund's luck and success may finally come to an end, as he is being challenged for the first time. In conclusion, this passage is important because it acts as an turning point in the story, where the wheel of fortune begin to turn, stripping away luck from one to another. This passage is also a turning point for the characters, as Edgar begins to regain what is rightfully his and bring order back to the kingdom while Edmund's luck being to fade, heading towards the bottom of the wheel. ...read more.