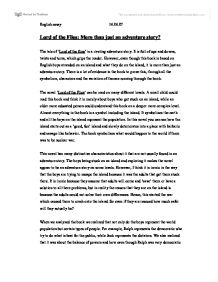 Lord of the Files: More than just an adventure story?

The tale of ‘Lord of the flies’ is a riveting adventure story. It is full of ups and downs, twists and turns, which grips the reader. However, even though this book is based on English boys stranded on an island and what they do on the island, it is more than just an adventure story. There is a lot of evidence in the book to prove this, through all the symbolism, characters and the variation of themes running through the book.

The novel ‘Lord of the Flies’ can be read on many different levels. A small child could read this book and think it is merely about boys who get stuck on an island, while an older more educated person could understand this book on a deeper more complex level. Almost everything in the book is a symbol including the island. It symbolizes the earth and all the boys on the island represent the population. In this novel you can see how the island starts out as a ‘good, fun’ island and slowly deteriorates into a place with barbaric and savage like behavior. The book symbolizes what would happen to the world if there was to be nuclear war.

This novel has many distinctive characteristics about it that are not usually found in an adventure story. The boys being stuck on an island and exploring it makes the novel appear to be an adventure story on some levels. However, I think it is ironic in the way that the boys are trying to escape the island because it was the adults that got them stuck there. It is ironic because they assume that adults will come and ‘save’ them or have a solution to all there problems, but in reality the reason that they are on the island is because the adults could not solve their own differences. Hence, this started the war which caused them to crash onto the island. So even if they are rescued how much safer will they actually be?

When we analyzed the book we realized that not only do the boys represent the world population but certain types of people. For example, Ralph represents the democratic who try to do what is best for the public, while Jack represents the dictators. We also realized that it was about the balance of powers and how even though Ralph was very democratic and wanted to please the people Jack’s political style ended up being the one that dominated the island.

Almost everything in the novel is a symbol that represents someone one or something, some more important than others. In the novel one of the most important objects was conch. The conch symbolized freedom of speech. Yet, throughout the book as Jack gains power and leadership, the color of the conch begins to fade. Finally it is shattered into a million pieces. This symbolizes the begging of dictatorship and the end of democracy and freedom of speech on the island, because without the conch there are no assemblies where people can discuss their opinions.

Another symbol which does not appear as an obvious symbol is the fire. The fire represents knowledge. We came to learn that knowledge, as well as fire, is not always a good thing. For example once the boys were able to master the arts of fire they nearly set the whole island to flames and while doing this they killed a boy.

Symbolisms even extend to minor characters such as Simon. Simon represents the prophets. Throughout the novel we came to realize that he was not like the other boys. Simon was able to see things clearly and make sense of things logically. Simon is the only one that recognizes that the beast truly is, they themselves. For this reason, Piggy finds him strange. While Piggy has to reason things out, Simon simply recognizes them as they are. Just like in Macbeth or Romeo and Juliet, Simon had to be killed because he started to steal the limelight from the other more major characters. Another character that needs to be recognized is Roger. Roger is somewhat like Macbeth and would probably have murdered Jack if they had not been rescued. He represents terrorism because he enjoys inflicting pain on others. Roger is cruel and an extension of Jack’s character. Sam’n’Eric represent the people that do not think about what they are doing, they simply follow. They are likeable but their morals can easily be swayed by their needs and lack of information (knowledge). They do what they think is best for them at the time.

The ‘Lord of the Flies’ has well developed characters and many symbols but the theme running through the book is another indication that the novel is more than just an adventure story. In many adventure stories where they explore the island the only slight sign of evil they may encounter is an animal. However, ‘Lord of the Flies’ has more depth to it. Many people on the island believe in the beast, yet few come to realize that the beast is themselves. So the theme that runs through the novel is evil in man.

Evil in man is basically the underlying moral of the story. It is what has caused the death of the two boys Perivale and Simon. It is also what fueled the intentions of killing one another for no logical reason. Just like Simon, Ralph and Piggy are able to finally able to conclude that there is no beast and that there is nothing to fear but the monster inside of us. Piggy comes to this conclusion as he thinks it is not scientific but Ralph realizes this at the end of the book when he comes to see that he is afraid of the inhabitants on the island and not the beast. Even though evil in man is a theme it is also a symbol. It represents all the wars and cruel behavior outside of the world. Roger torturing the little ones shows how we are the evil ones and how everyday people are being tortured and murdered. It is man that creates weapons of mass destruction, so the only thing to fear is ourselves. This is really proven when Jack convinces everyone to go on a wild rampage to kill Ralph even if that means burning the whole island.