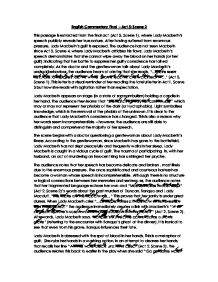 English Commentary Final - Act 5: Scene 2 This passage is extracted from the final act (Act 5, Scene 1), where Lady Macbeth's speech publicly reveals her true nature. After having suffered from enormous pressure, Lady Macbeth's guilt is exposed. The audience has not seen Macbeth since Act 3, Scene 4, where Lady Macbeth criticises his flaws. Lady Macbeth's speech demonstrates that she cannot wipe away the blood on her hands (or her guilt); indicating that her battle to suppress her guilty conscience has failed completely. As the doctor and the gentlewoman talk about Lady Macbeth's unusual behaviour, the audience hears of a letter that she reads, "...I have seen her...take forth paper, fold it, write upon't, read it, afterwards seal it..." (Act 5, Scene 1). This letter is a visual reminder of her reading the fateful letter in Act I, Scene 5 but now she reads with agitation rather than expectation. ...read more.

The trauma of participating in, with her husband, an act of murdering an innocent king has unhinged her psyche. The audience notes that her speech has become delicate and broken, most likely due to the enormous pressure. The once sophisticated and courteous hostess has become a woman whose speech is incomprehensible. Although there is no structure or logical connections between her memories and sentences, the audience notes that her fragmented language echoes her own and "Macbeth does murder sleep" (Act 2, Scene 2)'s words about the past murders of Duncan, Banquo and Lady Macduff. "The Thane of Fife had a wife..." This proves that her sanity is under great duress. When Lady Macbeth cries "...all the perfumes of Arabia will not sweeten this little hand..." the audience immediately creates a link with Macbeth's "Will all great Neptune's ocean wash this blood/clean from my hand?" ...read more.

Lady Macbeth (in this dreamlike state) hears a knocking at the gate, strongly reminding the audience of the Porter scene (Act II, Scene 3), where the Porter imagines himself sleeping at the gate of hell. The knocking refers to her suffering from the fear of hell. As she understands that her past actions cannot be undone, she humbly surrenders to her fate: "What's done cannot be undone" which reverses her earlier argument to her husband "What's done is done" (Act 3, Scene 2). After her speech, the audience sees Lady Macbeth returning to her sleep, which can be seen metaphorically as facing death. In this passage, Shakespeare shows a broken woman. She is no longer the determined woman who begs the gods to "de-sex" and "take my milk for gall", but the one who is struggling with her guilt. Lady Macbeth emerges as a human being of flesh and blood as opposed to her "fiend-like queen" (Act 5, Scene 9) described b y Malcolm at the conclusion of the play. ?? ?? ?? ?? ...read more.