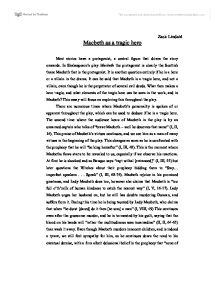 Macbeth as a Tragic Hero

Zack Lindahl Macbeth as a tragic hero Most stories have a protagonist, a central figure that drives the story onwards. In Shakespeare's play Macbeth the protagonist is clearly the Scottish thane Macbeth that is the protagonist. It is another question entirely if he is a hero or a villain in the drama. It can be said that Macbeth is a tragic hero, and not a villain, even though he is the perpetrator of several evil deeds. What then makes a hero tragic, and what elements of the tragic hero can be seen in the work, and in Macbeth? This essay will focus on exploring this throughout the play. There are numerous times where Macbeth's personality is spoken of or apparent throughout the play, which can be used to deduce if he is a tragic hero. The second time where the audience hears of Macbeth in the play is by an unnamed captain who talks of "brave Macbeth - well he deserves that name" (I, II, 16). ...read more.

During this time he is being taunted by Lady Macbeth, who claims that when "he durst [dared] do it then [he was] a man" (I, VIII, 49) This continues even after the gruesome murder, and he is tormented by his guilt, saying that the blood on his hands will "rather the multitudinous seas incarnadine" (II, II, 64-65) than wash it away. Even though Macbeth murders innocent children, and is indeed a tyrant, we still feel sympathy for him, as he continues down the road to his eventual demise, with a firm albeit delusional belief in the prophecy that "none of woman born shall harm Macbeth" (IV, I, 79-80). The audience's knowledge of that the prophecy is being fulfilled, leaves us with Macbeth as a pitiful figure, as he hurls insults to his servants and curses the names of those who flee the castle Dunsinane. ...read more.

His death is tragic, for it being the direct result for his flaws that are not fully under his control. This does not make him less of an evil man during his reign of terror, but as the spectators are prone to feel sympathy for Macbeth, he is not fully overshadowed by his wickedness. This undeserved sympathy may stem because it is easy to relate to him as a person, as he is noble in nature, but has some dire imperfections that make him more human. In conclusion, Macbeth's innately noble but critically flawed personality and the results of that is what make Macbeth a tragic hero. In another environment, without the original prophecy by the witches, Macbeth could have prospered. Instead, his faults rush him to complete destruction, but still have the effect that it does not feel as if it is Macbeth's own doing. Macbeth does indeed qualify for the title of a tragic hero by having these characteristics. Words: 807 ...read more.