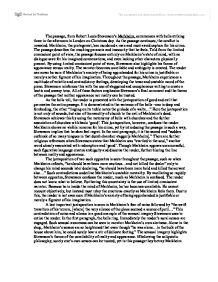 The passage, from Robert Louis Stevenson's Markheim, commences with bells striking three in the afternoon in London on Christmas day. As the passage continues, the conflict is revealed: Markheim, the protagonist, has murdered a man and must avoid capture for his crime. The passage describes the resulting paranoia and insecurity that he feels. Told from the limited omniscient point of view, the passage focuses entirely on Markheim's state of mind, with no dialogue save for his imagined conversations, and even lacking other characters physically present. By using limited omniscient point of view, Stevenson also highlights his theme of appearance versus reality. The narrator becomes unreliable and ambiguity is created. The reader can never be sure if Markheim's anxiety of being apprehended for his crime is justifiable or merely another figment of his imagination. Throughout the passage, Markheim experiences a multitude of volatile and contradictory feelings, developing the tense and unstable mood of the prose. Stevenson reinforces this with the use of staggered and cacophonous writing to create a hectic and uneasy tone. All of these factors emphasize Stevenson's final comment and the theme of the passage that neither appearance nor reality can be trusted. ...read more.

The juxtaposition of two such opposites is seen throughout the passage, such as when Markheim reflects, "he should have been more cautious...and not killed the dealer" only to change his mind seconds later declaring, "he should have been more bold and killed the servant also..." Such contradictions underline Markheim's unstable mentality. By vacillating so rapidly between opposites, Stevenson confuses the reader, much as Markheim is confused. The reader does not know what to believe. Furthering this uncertainty is the use of limited omniscient narrator. Because he is inside the mind of Markheim, he too becomes unreliable. He cannot recount objectively, but instead must relay the emotions exactly as Markheim feels them. Due to this, the reader is not even sure if Markheim's anxiety of being apprehended is justifiable or merely a figment of his imagination. A last important juxtaposition is seen in Markheim's fear of noise followed by "the swift transition of his terrors, [where] the very silence of the place seemed a source of peril..." This contradiction of noise and silence is a good example of the sensual imagery Stevenson uses to entice the reader. ...read more.

The sentences are at times, short and choppy. In the second paragraph, a sentence runs for nearly seven lines, littered with semicolons and colons. The phrases blur together as does the line between appearance and reality. Markheim's mental state is foggy and unclear. The writing mirrors this. Set in a London antique shop, the location also seems to mirror the plot. It is a foggy day and the shop is gray and dusty. Multiple times Markheim refers to the stillness of it evoking thoughts of death. The silence and the fact that antiques are old remind Markheim of his crime, furthering his paranoia and leading him to believe he will be caught. Additionally, he is alone in the antique shop. This isolates him to create a scenario in which he is pitted against the outside world. Markheim's conflict revolves around whether or not he will be caught for the murder he has committed. Due to ambiguous language, and unreliable narrator, and confusing sentence structure though, the reader is unsure if Markheim's suspicions are warranted. Markheim, as well, is unsure. He hallucinates and constantly changes his mind. He is confused, much like the reader. From this haze Stevenson draws his theme -that neither appearance nor reality can be trusted. ...read more.