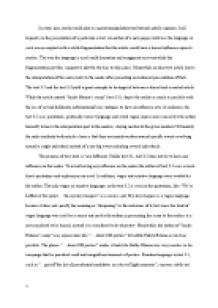 ﻿In status quo, media could play as a great manipulation tool towards public opinion. It all depends on the presentation of a particular event. An author of a newspaper could use the language in such a way coupled with a subtle fragmentation that the article could have a biased influence upon its readers. The way the language is used could dramatize and exaggerate an event while the fragmentation provides supportive plot for the bias to take place. Meanwhile an objective article leaves the interpretation of the said events to the reader after presenting an unbiased presentation of facts. The text 3.2 and the text 3.3 yield a great example to distinguish between a biased and a neutral article. While the article named ?Inside Bitama?s camp? (text 3.1) shapes the reality as much as possible with the use of several deliberate informational bias strategies to have an influence over its audience, the text 3.2 uses quotations, politically correct language and avoid vague expressions (caused by the author himself) to leave the interpretation part to the readers, staying neutral to the given incident. ...read more.

The euphemism in the text 3.1 was used for satirical purposes, while the euphemism in text 3.2 is used to be politically correct and be as least offensive as possible about a very delicate issue, which is a possible fraud that Nixon (37th president of United States) was involved. The scandal was named as ?bugging incident? and White House?s neutrality towards the incident was presented as ?The White House did not comment.?, when instead author could have mentioned how the White House was trying to avoid any more scandals by an offending language. The use of euphemism aims to elude any kinds of provocation this article could have had on its readers, and it completely leaves the judging part to the reader. In text 3.1, the phrase ?People?s president? was used by the author to describe Paddy Bitama. Even though ?people?s president? could very well be interpreted as just a nice way of saying president, but in this case context takes an important place in the meaning this phrase conveys. ?Bitama grabbed an Irish potato from his plate saying as a people?s president, he had to eat with them. ...read more.

For example, ?he told them they would get it after he has been sworn in as president? also ?among the supporters in the convoy was his colleague, Kapere?? ?Kapere was forced to take off his shirt??. As it could be seen the author is furtively and constantly attacking Paddy. Showing as he even forces his colleagues to take their shirts off and giving false promises. Despite the fact that text 3.2 was indeed more about an individual, like the other article, the author does not get too personal with Richard Nixon, but he presents the whole incident as an unbiased observant. In the end both articles are aiming to report the news, while the difference being the text 3.1 chooses to manipulate the reality as much as possible to have an influence over its readers, the author of text 3.2 tries to stay unbiased while doing the reporting part. The article about Richard Nixon uses euphemism, quotations and a neutral tone to achieve its aim. Meanwhile the other text?s author makes use of paraphrasing, personalization and vague language in a subtle way to ?shape? the truth as much he feels to. So even though the preliminary purpose of both articles is to? report?, the real intentions are far different. ...read more.