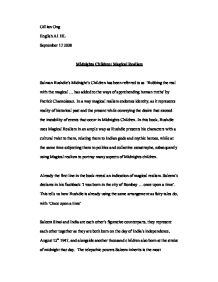 Midnights Children: What is Magical Realism

Gillian Ong English A1 HL September 17 2008 Midnights Children: Magical Realism Salman Rushdie's Midnight's Children has been referred to as 'Rubbing the real with the magical ... has added to the ways of apprehending human truths' by Patrick Chamoiseau. In a way magical realism endorses identity, as it represents reality of historical past and the present while conveying the desire that exceed the instability of events that occur in Midnights Children. In this book, Rushdie uses Magical Realism in an ample way as Rushdie presents his characters with a cultural twist to them, relating them ...read more.

once upon a time'. This tells us how Rushdie is already using the same arrangement as fairy tales do, with 'Once upon a time' Saleem Sinai and India are each other's figurative counterparts, they represent each other together as they are both born on the day of India's independence, August 15th 1947, and alongside another thousand children also born at the stroke of midnight that day. The telepathic powers Saleem inherits is the most extraordinary out of all the powers given to the 'Midnight's Children', as he loses and regains ability to connect to the other thousand telepathically. ...read more.

This contributes to the tone of Magical realism, as obviously in reality this isn't achievable. Rushdie often mentions 'cracks' in the book. The 'crack' in the body of the book, is in relation to Saleem breaking down emotionally through 'Midnights Children'. A point in the book where Saleem confesses his powers to his parents, and his father strikes him on the ears, in this incident; his 'stupid cracks' are literally physical cracks now. In this instance, Rushdie has substituted the emotional for the physical. Empirical referents evoke non-empirical referents and vice versa. The relation of Saleem's birth, growth, development, devastation are related to India in comparison to his character. ...read more.