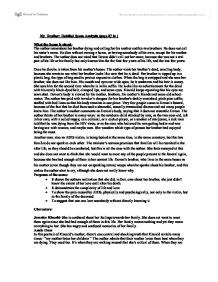 My Brother: Detailed Scene Analysis (page 87 to ) What the Scene is about: The author remembers her brother dying and calling for his mother and his two brothers. He does not call his sister's name. He dies without owning a home, or having somebody of his own, except for his mother and brothers. The author does not mind that Devon didn't call out her name, because she was not a real part of his life or his family has only known him for the first few years of his life, and the last few years. Once he dies he is taken from his mother's house. The author visits her brother's dead, smelling body, because she wants to see what her brother looks like now that he is dead. Her brother is zipped up in a plastic bag, the type of bag used to protect expensive clothes. When the bag is unzipped and she sees her brother, she does not like him. ...read more.

She feels annoyed at this and she does not want to think that she would want to meet any of the people present at the funeral again, because she has had enough of them in her current life. Devon's brother, who lives in the same house as his mother (even though they are not on speaking terms) weeps when he speaks about his brother, and this makes the author start to cry, although she does not really know why. Purposes of the scene: * It shows the authors realization that she did, in fact, care about her brother, she just didn't know the extent of her love until after his death. * It demonstrates the complexity of life and love. * To show the pain caused by AIDS, physically and psychologically, not only to the victim, but to the family of the deceased. * To suggest that one can love somebody without directly knowing it. Characters: Jamaica Kincaid- She is confused about her feelings towards her family. ...read more.

Diction The diction of each family member reveals a great deal. The author's writing is formal, and her choice of words and communication contrasts that of her mother and siblings. The author uses harsh, outspoken vocabulary, making the reader familiar with her reality, and her birth place, Antigua. She develops strong arguments about AIDS and how cruel the disease can be. Her words portray real human emotions. Metaphor Devon's death could be a metaphor of the impossibility of an escape from something. In Devon's case it was a killer disease, and for the author it was her family roots and her failure to shut out her birth-place from her memory. Tone The tone in this scene is mainly a grim one, with sadness and a portrayal of Devon's life being wasted. However there are some slight tones of compassion, such as when the author weeps at her brother's funeral. Personification AIDS is personified in the same way as the colonizing powers Oxymoron: In this scene there is an oxymoron of "love-hate" with the author's confusion about whether she loves her family or hates them. ...read more.