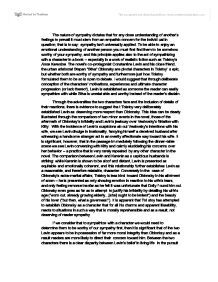 Nature of Sympathy in Anna Karenina

The nature of sympathy dictates that for any close understanding of another's feelings to prevail it must stem from an empathic concern for the individual in question; that is to say: sympathy isn't universally applied. To be able to enjoy an emotional understanding of another person you must first find them to be somehow worthy of your sympathy, and this principle applies also to the act of sympathizing with a character in a book - especially in a work of realistic fiction such as Tolstoy's Anna Karenina. The novel's co-protagonist Constantine Levin and his close friend, the urban aristocrat Stepan "Stiva" Oblonsky are pivotal characters in Tolstoy's epic, but whether both are worthy of sympathy and furthermore just how Tolstoy formulated them to be so is open to debate. I would suggest that through deliberate conception of the characters' motivations, experiences and ultimate character progression (or lack thereof), Levin is established as someone the reader can easily sympathize with while Stiva is unrelatable and worthy instead of the reader's disdain. Through the adversities the two characters face and the inclusion of details of their reactions, there is evidence to suggest that Tolstoy very deliberately established Levin as deserving more respect than Oblonsky. This idea can be clearly illustrated through the comparison of two minor events in the novel, those of the aftermath of Oblonksy's infidelity and Levin's jealousy over Veslovsky's flirtation with Kitty. ...read more.

Levin is consistently focused toward goals larger than his person, and in his endeavors is portrayed with a sincerity and vulnerability with which he views and interacts with his surroundings. This quality is exemplified within Levin by his career choice: farming, which is typical of country life and predominantly concerned with the care and maintenance of something bigger than oneself (the land). Oblonsky, on the other hand, is an emblematic Russian aristocrat, concerned primarily with dinner parties, women, and leisure activities. Effectively, Oblonksy is representative of the corrupting nature of city living - his pleasure seeking has perverted his good nature, and he is preoccupied with the satisfying his base urges regardless of the damaging effect it may have on the world and people around him. This is echoed in his prolonged neglect of Dolly, and his unwitting devaluation of Russian forest resources in the pursuit of easy capital. Any superficially considerate acts on his behalf are executed with an emotional vapidity (attempting to resolve the situation between Karenin and the estranged Anna and proceeding to think of jokes with which to amuse his drinking companions) that serves to dispel any reader compassion toward him. The two characters are described as two sides of a coin, one conscientious and spiritual, the other self-obsessed and frivolous - reader sympathy is directed accordingly. ...read more.

than the other. Throughout the novel, Levin is portrayed as being on a quest for meaning, beginning with his attempted reform of Russian agricultural practices, and culminating in his final sincere belief in God and His power. All of his growth and character progression is detailed, establishing between the reader and Levin an understanding bordering on affection and resulting in an empathic concern - a prerequisite for sympathy. Oblonksy's character is in stark contrast to this - he is consistently unchanging, remaining essentially the same character from his initial domestic disputes to when we see him in the novel's closing pages, picnicking with Levin and their respective families. What the reader begins to see is that Oblonsky is less of a fully-fledged character worthy of sympathy and more of a constant by which other character's developments can be gauged by. Essentially, I feel that the reason that it is easier for a reader to sympathize with Levin over Oblonsky is that the two characters were deliberately created to achieve this effect, through Tolstoy's meticulous rendering of their specific character traits and their individual roles within the novel. Both are hugely significant, and serve important functions within Anna Karenina, but ultimately reader sympathy is inclined to lie with the more relatable and humane of the two. ...read more.