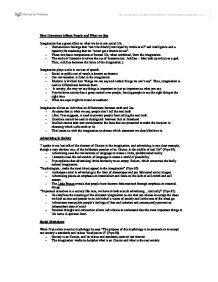 How Literature Affects People and What we Say Imagination has a great effect on what we do in our social life. - Humans have feelings that "can't be directly conveyed by words at all" and intelligence and a capacity for reasoning that we "never get a chance to use". - These two basic components of human life, when combined, form the imagination. - The study of literature involves the use of literature (ex. Achilles - Men look up to him as a god. Thus, Achilles becomes the focus of the imagination.) Imagination plays a role in our use of speech. - Social or public use of words is known as rhetoric - Our conversation is fixed in the imagination - Rhetoric is divided into "things we can say and certain things we can't say". Thus, imagination is used to differentiate between them. ...read more.

- Advertising uses the conventions of language to create a finite, prefabricated reality. - Literature uses the convention of language to create a world of possibility. - Frye explains that advertising limits humanity to an empty illusion, which consumes the badly trained imagination. "Psychologists...make the most direct appeal to the imagination" (Frye 85) - Archetypes exist in advertising in the form of stereotypes and pre fabricated social images - Advertising places an emphasis on materialism and feeds on the lack of self-worth and self esteem. - The Little Prince reveals that people have become dehumanized through emphasis on material things. "To protect ourselves in a society like ours, we have to look at such advertising...ironically" (Frye 85) - He redefines the meaning of the educated imagination as one that can choose to accept the ideas we hold as true and pertain to an individual's vision of society and let the rest of the ideas go. ...read more.

- The forms of the words that we use are social myths; language is corrupted by the imaginary and is ever changing. - The structure of the words is not what is important but the content is what is paid attention to. - The constructive power of the imagination is often overlooked and should be used to develop a structure of words not influenced by social mythology - Without imagination words become meaningless and nothing more than the pointless rabble of mob mentality. "There's the use of what we call jargon...the gabble of abstractions and vague words which avoids any simple or direct statement" (Frye 61) - Jargons are used to create illusions and misleading words, thus they are part of the social mythology that hides real society. - The users of jargons attempt to separate themselves from society and appear better than the rest; this is an illusionary eloquence. - Literature is used to present information without distinction, where as jargons are used to present information while trying to exclude people. ...read more.