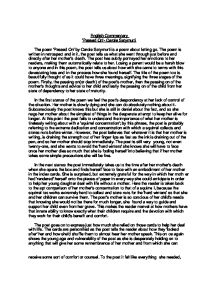 English Commentary 'Passed On'- Carole Satymurti The poem 'Passed On' by Carole Satymurti is a poem about letting go. The poem is written in retrospect and in it, the poet tells us what she went through just before and directly after her mother's death. The poet has subtly portrayed her emotions to her readers, making them automatically relate to her. Losing a parent would be a harsh blow to anyone and in this poem, the poet tells us about how with she came to terms with this devastating loss and in the process how she found herself. The title of the poem too is beautifully thought of as it could have three meanings, signifying the three stages of the poem. Firstly, the passing on(or death) of the poet's mother, then the passing on of the mother's thoughts and advice to her child and lastly the passing on of the child from her state of dependency to her state of maturity. In the first stanza of the poem we feel the poet's despondency at her lack of control of the situation. ...read more.

The poet's mother is so concious of her child's needs that knowing she would not be there for much longer, she found a way to guide and support her child even from her grave. This makes the reader marvel at how mothers have that innate ability to know exactly what their children require and the devotion with which they work for their child's benefit and comfort. The poet goes on to express just how much she relied on those cards to help her deal with life. The cards are personified as the poet tells the reader about how they 'looked after' her and how she'd shuffle them to almost hear her mother speak. This once again shows the young age and vulnerability of the poet as she is desperately holding on to anything that will give her some remembrance of her mother and from which she can receive some sort of comfort or counsel. To the poet it felt like everything she needed, the solution to all of life's problems could be found in that box and so it became her world. ...read more.

Once again the reader is awed at how sensitive a mother is to her child's needs and how well she knows every nuance of her child's character. In the final stanza we see how the tone of the poem changes completely. The poet now speaks in clear, well-defined sentences which is a sure sign of maturity. The poet is finally confident enough to live without the cards. When she tips them into the fire it is almost as if she is purging herself of her earlier dependence and starting off afresh as a person who is self-confident and capable of making her own decisions, who can face anything life throws at her and thereby make her own memories and diaries of thoughts and advice. This achievement of maturity by the poet is a beautiful way to end the poem. Every mother's dream is to see her child self-sufficient and successful. By writing the cards, the poet's mother wanted to give her some initial guidance, push her in the right direction and then leave her to learn from her own experiences. Undoubtedly, the poet reached this stage at the end of the poem which leaves the reader completely content with small smile on his/her face. ...read more.