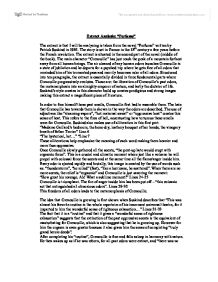 Extract Analysis: "Perfume" The extract is that I will be analyzing is taken from the novel "Perfume" written by Patrick Suskind in 1985. The story is set in France in the 18th century a few years before the French revolution. The extract is situated in the second part of the novel (middle of the book). The main character "Grenouille" has just reach the peak of a mountain furthest away from all human beings. The air cleaned of any human odors launches Grenouille in a state of jubilation and he departs for a psyched trip where he gets free of all odors that reminded him of his tormented pass and merrily becomes ruler of all odors. Structured into ten paragraphs, the extract is essentially divided in three fundamental parts where Grenouille progressively evolutes. Those are: the liberation of Grenouille's past odors, the metamorphosis into an almighty emperor of nature, and lastly the dictator of life. Suskind's style creates in this character build up creates prodigious and strong images making this extract a magnificent piece of literature. ...read more.

Ah! What a sublime moment!" Lines 24-25 Grenouille is triumphant. The fire of anger inside him has been put off - "this volcanic act that extinguished all obnoxious odors". Lines 29-30 This freedom of all odors leads to the metamorphosis of Grenouille. The idea that Grenouille is growing is first shown when Suskind describes that "This was almost his favorite routine in the whole repertoire of his innermost universal theatre, for it imparted to him the wonderful sense of righteous exhaustion..." Lines 31-33 The fact that it is a "routine" and that it gives a "wonderful sense of righteous exhaustion" suggests that the extinction of the past oppressive scents is the equivalent of masturbating for Grenouille, which is also suggesting that he is growing up. However for him the orgasm is even greater because it also gives him the sense of completing "truly grand heroic deeds". After completing his "routine", Grenouille is free and falls asleep in harmony with nature. He then wakes up as if he was reborn, for all past odors were extinct, and "there was no real thing in Grenouille's innermost universe, only the odors of things". ...read more.

I shall withdraw..." What Grenouille does not know however, is that the gods hate it when mortals try to be one of them, ever since back in the Greek Mythologies. The gods hate seeing humans trying to decide of their own fate the fates of others and thus curse them. Oedipus for example thought he was so great that the gods had to put him back where he belongs, amongst the mortals. The same thing happened Grenouille the Great, no matter how great his powers were, he was cursed by the gods and could never smell himself. The style in this extract has created grandiose imageries through the use of literary devices such as metaphors, similes, use of words, alliteration and the reference to the Greek tragedies which says that mortals do not decide of their fate and that great things never last. Poor Grenouille might be enjoying himself now, but he will soon come to realize how absurd it was to think he could control the world id he himself was cursed. ?? ?? ?? ?? ...read more.